Maria Bueno was a fashion icon, a true fashionista, primarily due to being snapped up by couturier Ted Tinling on her arrival in Europe in 1958, but also because of her grace and beauty on the court and her innate ability to wear clothes well.

When people talk about fashion in tennis, Maria’s name always crops up alongside that of Suzanne Lenglen, Gussie Moran before her and, later on, Evonne Goolagong Cawley – all significant signposts in the evolution of on-court clothing design.

The more utilitarian look prior to being dressed by Ted Tinling

The relationship with Tinling didn’t start out smoothly, though, because Maria was being courted by others, including Fred Perry, the major popular, if utilitarian, clothing line at the time.

“I was given some clothing by Fred Perry but when Ted saw me wearing an outfit at Lady Crossfield’s garden party [held annually at Witanhurst in Highgate] he kept insisting he must design dresses for me and wouldn’t take ‘no’ for an answer.” 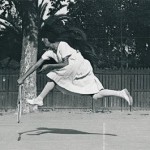 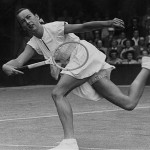 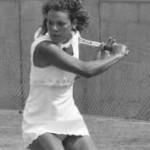 Maria became the major star in a long line of players clothed by Tinling, who was an interesting character himself in the world of tennis for several decades. 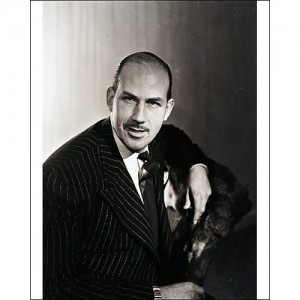 Cuthbert Collingwood ‘Ted’ Tinling (23 June 1910 – 23 May 1990), sometimes known as ‘Teddy’, was an English tennis player, fashion designer, spy and author, and he was a firm fixture on the tennis tour for over sixty years.

As a fashion designer he created garments for many of the biggest female stars of the 50s, 60s and 70s tennis scene.

His love of the game began in 1923, when aged 23 and suffering from bronchial asthma, his parents sent him to the French Riviera on doctor’s orders.

It was there he began playing tennis at the Nice Tennis Club where Suzanne Lenglen, the biggest star of the day, would practice. Despite Tinling’s youth, Lenglen’s father asked him if he would umpire one of her upcoming matches and he would go on to be her personal umpire for two years in between his short career as a player himself.

This friendship with Lenglen led him to his first Wimbledon Championships in 1927, where he became Player Liaison until 1949 while establishing his craft as a couturier. 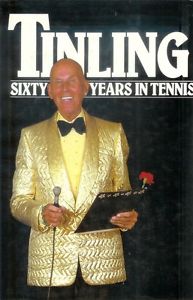 During World War II, Tinling was a Lieutenant-Colonel in the Intelligence Corps in Algiers and Germany. He also authored two books:

His relationship with the All England Lawn Tennis Club soured in 1949 when he was asked to leave his post as Master of Ceremonies at Wimbledon after one of his designs for Gussie Moran, including the first lace tennis panties, shocked the committee for ‘having drawn attention to the sexual area’. 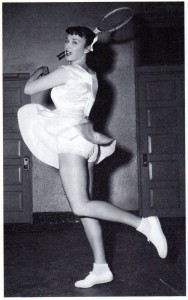 The story goes that when Moran asked Tinling to design a Wimbledon dress for her, he took the result of his labours around to the Dorchester hotel for Gussie’s approval.

”Yes, that’s lovely,” she said. ”But what am I going to wear underneath? I’ve always worn shorts before.”

Tinling’s immediate reaction was that Moran’s undergarments were no responsibility of his but, in the end, he agreed to make a pair of knickers using leftovers from the dress, which he had made out of the new fabric rayon and because material was in short supply after the war.

”But I thought they needed something extra,” Tinling said. “I thought a little lace trimming might look nice. It was nothing special. In fact it was nothing more than what my mother would have called ‘kitchen’ lace.”

Yet it caused a sensation.

He later compounded his Wimbledon exile in 1964 by presenting Maria to the Centre Court crowds in a beautiful white creation of a dress that had a shocking pink underskirt with matching pink panties, which had the crowd murmuring as she served.

“There was a gasp from one end of the court,” recalls Maria, laughing. “And the people the other end didn’t know why, until I changed ends and served from there…

“Later I wore panties that resembled the club colours, which outraged the club committee and they brought in the all-white clothing rule!”

Ted was employed again by Wimbledon from 1982 as a Player Liaison and also acted as International Liaison, Director of Virginia slims [1982-90] and Chef de Protocol the ITF and the Federation Cup [1978-90].

“Every spring I would meet with Ted in Rome and we would discuss the dresses for the year,” Maria told the website.

“This involved looking at new fabrics, the styling he had in mind, the colours of the year, approving the designs and a fitting.

“When I got to London I went straight to his studio in the North End Road, near The Queen’s Club, where I’d try all the dresses on for a final fitting.

“We talked about what which dress I should wear for what match, particularly for the semis and finals at Wimbledon, so we had a good idea of what was going to appear and when.

“I was always amazed at the detail Teddy put into his dresses. All the zips had tennis rackets [sliders] and he used the best silk materials, often embroidered in some way with pearls or gold inlay or silver panels.

“I won my first Wimbledon championships, the doubles [with Althea Gibson] wearing a simple dress with palm trees around the waist.

“They were all exquisite creations with matching jackets or cardigans and, of course, the famous panties that started out lacy but then turned into being more like shorts.

“They looked fabulous and were so comfortable to wear because he tailored each dress exactly for me.

“He never wanted me to wear the same dress twice so I had an amazing number of them. In fact, I still have around 84 of them back home and 6 of the most important ones in London so I can show them off at personal appearances and so on.

“I have also donated several to the Wimbledon Museum and the International Tennis Hall of Fame.” 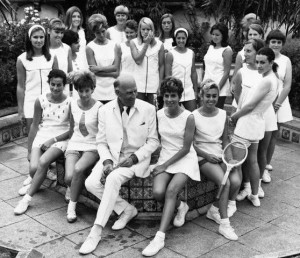 Tinling held a viewing of his dresses each year on the eve of Wimbledon.

Ted Tinling, the premier dress designer in tennis, sold his exclusive line of tennis dresses at outlets such as Lilywhites and Harrods in London and were marketed by English Calico, Ltd. of London all over the world. .

When Maria retired at the height of her career she was Tinling’s premier star, but seven years later when she returned to the Centre Court at Wimbledon, she toted a completely different look.

Now clothed by FILA, it was a modern, more popular look.

Later she sported clothing by Tacchini before becoming a Nike player in 2009.