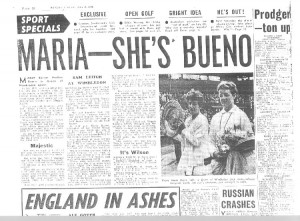 Published in the January 2018 edition of Tennis Threads magazine – a six page special written by Henry Wancke on the makings of a great champion.

MARIA BUENO WANTS TO COME BACK. CAN SHE?

Sam Leitch wrote at Wimbledon in the Sunday Mirror on July 6, 1964

Peter Lorenzo wrote at Wimbledon in the Daily Herald on Friday 3 July, 1964

Laurie Pignon wrote in the Sketch Sport on Friday, July 6, 1962

WINNER WITH A  SECRET – Loser with frills

Frank Rostron and Robert Moore wrote on the front page of the Daily Express on Friday, July 6,  1962

AN EFFIGY AT MADAME  TUSSAUD’S

Jack Peart wrote in the Sunday Pictorial on July 3, 1960

Laurie Pignon wrote at Wimbledon in the Sketch Sport on Friday, July 1, 1960

THE DEADLY BUENO-BOMBSHELL FROM BRAZIL