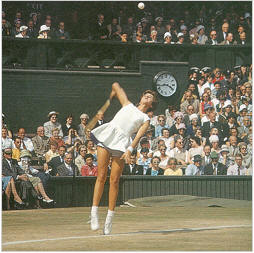 Maria  has been described in countless books over the past 40 years but a recurring  theme is her feline quality. Here are but a few examples:-

“She was an actress. I would leave her alone for a few minutes  and she would do her poses in front of the mirror and please herself how the  dress was going to look on her.”

“A one-grip stroke maker,  Maria’s backhand was a poem of sweeping grace and her volleys the brushings of a  master artist. Send her a lob and she pounced with the menacing swiftness of a  panther to bury the ball with a frightening finality; hers was a smash no man  would scorn.”

“She looked like an exotic  Siamese cat as she roamed the court. Maria was sinuous, sensuous and feminine.  They called her the Queen of Wimbledon.”

TED TINLING (“A Handful of Summers” by  Gordon Forbes, published 1978)

“Maria Bueno, a magnificent  panther of a woman.

“Rarely, if ever, has such  physical beauty of movement been combined with such marvellous strokes, to which  timing gave ferocious power, allied usually to impeccable length. She looked  like a panther hunting for the kill. At peak form her game was imperious; all  she lacked was Little Mo’s consistency….. At her height, Maria had been a  queen whose grace and power were without compare.”

“Miss Bueno, slim, dark,  swift, and super-feminine in her inconsistency, her love for a fine dress and  for a quick cry of admiration…. “ 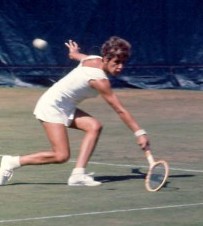 “Between 1959 and 1964 we  were treated to three regal wins from the artistic racket of the elegant queen of Brazilian tennis, Maria Bueno. Here was poetry in motion whose every movement combined the grace of a ballet dancer  with the controlled power of a top gymnast.”

“She was such a beautiful player. I used to watch her play, and not watch the ball at all.”