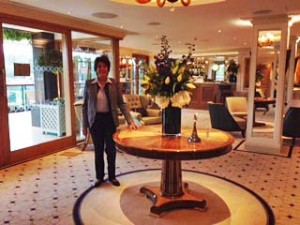 Maria Bueno checks out the lovely new clubhouse at Wimbledon

Maria has arrived in London and already is busy with her schedule.

She visited the All England Lawn Tennis Club to see the new clubhouse facilities and was very impressed with the innovations there.

“Like all things at Wimbledon, it is beautifully done,” she told the website. “They’ve kept the tradition and improved the space by making it more comfortable for members and more in keeping with the Royal Box, which is right there.

“There’s a lovely new restaurant and lounge area, which are more formal, and a club room where members can eat more casually. There’s even a library now!

“It seems everyone is very happy with all the changes.”

Maria has been out and about catching up with friends and preparing for her social whirl during Wimbledon as the Chairman’s special guest.

“They’ve got a lot lined up for me so I am going to be pretty busy,” she said. “I’ll also be working for TV Globo so there’s a lot to do. It’s been fun being able to relax a bit before it all starts!”

Maria Bueno has been watching Roland Garros and is impressed with what she has seen this year.

She has been keeping an eye on the French Championships at Roland Garros too.

“Good to see a lot of new faces coming up, especially with the women,” commented Maria. “It’s good for the game to have challengers to the old faces.

“I just wish they had more creativity in the way they play, coming to the net more and using drop shots, and that goes for the men too!

“There were some really good matches in both draws, though, and it is always interesting watching these clay court battles.

“We were treated to a fantastic final and [Simona] Halep put up a hell of a fight trying to stop Maria Sharapova winning her second title,” Maria continued.

“It took just over three hours and both players looked pretty fresh throughout although they were playing incredibly long and brutal rallies. It just go to show how fit they are these days. 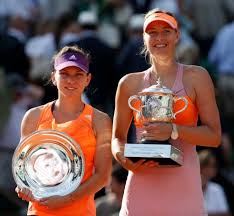 “In the end there was very little in it and Maria came through. You could see how much it meant to her and she deserves her success. I know how difficult it us to recover from shoulder surgery and to come back as she has done, better than ever, is fantastic!

“I have to say that Rafa [Nadal] Is out of this world! Everyone said he would never come back and here he is again, playing at his very best and reaching the final in Paris for, what the ninth or tenth time? Amazing!

“He had a tough time in the beginning because his back was hurting but he somehow comes through these things and the way he played against [Andy] Murray was a master class! Andy had no answers and if he plays like that tomorrow in the final against [Novak] Djokovic, Rafa is going to win another Paris title, that’s for sure.

“You have to give credit to Djokovic too, who is determined to win the one title that has alluded him so far and he has come through the draw dropping only one set, much like Rafa did.

“It’s going to be a great final with the number one spot on the line! Can’t wait!”

And now the grass court season is starting here in England so Maria will be keeping a very close on that in the build up to Wimbledon.