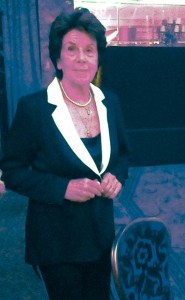 Maria has kicked off Wimbledon in some style as a guest of the International Club.

On Saturday she attended the Gala Ball at the Dorchester Hotel in London where alongside 300 other guests, the international tennis family came together to celebrate the 128th staging of The Lawn Tennis Championships, which began in 1877.

The idea of an International Club, whose members are players who have represented their country in international team competition, arose out of a conversation at the 1923 Wimbledon Championships between Lord Balfour, then British Prime Minister, and Wallis Myers, an outstanding journalist and writer on lawn tennis.

The purpose of an International Club was to promote international goodwill by friendship across the tennis net and Myers founded the International Lawn Tennis Club of Great Britain on 26 November 1924 with steel grey and pink as the club’s colours.

The IC Council is the umbrella organisation for International Clubs across the globe and, this year, the IC of Great Britain hosted teams from Mexico and Italy.

Maria was a recipient of the IC’s Jean Borotra Award in 2003, made periodically to a player who has shown throughout his or her playing career the outstanding standard of sportsmanship commensurate with the objects of the International Clubs. 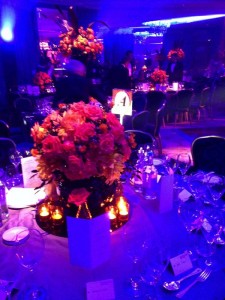 “The dinner on Saturday was a lovely occasion,” said Maria. “It’s always fun when tennis players get together and I always enjoy seeing friends from way back. It brings back good memories!”

Fellow special guest at Wimbledon this year, Ken Rosewall, was there too, as was Marion Bartoli, the reigning ladies champion, who is not defending her title because she retired shortly after winning.

“Marion is keeping pretty busy, starting up her own business and taking on a philanthropic role with the IC to promote tennis around the world to under privileged kids,” continued Maria.

Bartoli addressed the assembled guests on Saturday, having made the journey down from Liverpool by train, where she competed in an exhibition event there.

She has no regrets about retiring, particularly since she still cannot lift her arm each morning.

She will be watching from the Royal Box on Tuesday as Sabine Lisicki, last year’s beaten finalist, plays the first of the day’s matches on Centre Court, the honour reserved for the defending champion, and she will be relishing the few remaining days she has left as the current Wimbledon champion.

“I know how hard it is to sit out as the defending champion,” recalls Maria, who fell ill in 1961 and was unable to go for her hat trick of singles titles. “But I wasn’t there to see others play for my title. It must be pretty unusual for her.”

In 1961 Maria arrived in Paris feeling tired and feverish, symptoms for what later turned out to be hepatitis, a condition that sent her home to Brazil where she was confined to bed for eight months, during which time her weight dropped by 24 lbs.

It took her some time to recover but by February 1962, she had her sights set, once again, on Wimbledon and successfully won her third singles title in 1964, a fact being celebrated this year, some fifty years later.

“It seems like only yesterday,” she admits. “I really can’t believe it is half a century ago!” 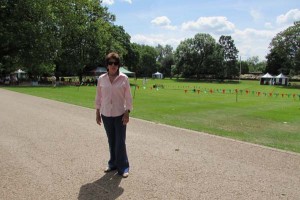 “It is such a beautiful club,” she said. “It is just how I expect an English club to be but I think it is very unusual these days.”

Bordering the Thames in Fulham and set in 42 acres of magnificent grounds, The Hurlingham Club is a green oasis of tradition and international renown.

Recognised throughout the world as one of Britain’s greatest private members’ clubs, it retains its quintessentially English traditions and heritage, while providing modern facilities and services for its members. 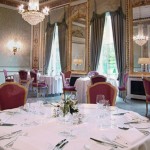 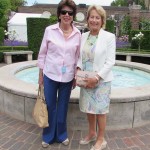 Maria Bueno was shown around Hurlingham Club by Mrs R Weatherill, wife of the IC President. 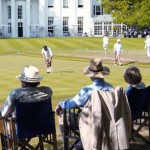 Maria was warmly welcomed to the club by the Chairman, Sandy Cahill, where she enjoyed a delicious lunch, was shown around and then watched an exhibition doubles match between Jamie Murray and John Peers against Ross Hutchins and Colin Fleming.

“It was a beautiful day so it was lovely to see everyone out there enjoying themselves. 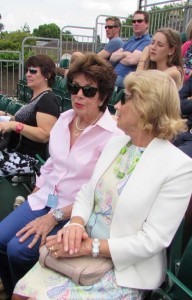 “It is like a big park and I understand they have around 6,000 members with their families so it is about the size of my club at home, Harmonia, in Sao Paulo.

“There was a band playing, people walking their dogs, playing croquet and shooting clay pigeons…

“I was told the club started out as a place to shoot pigeons out in the country, which is why they have one on their logo apparently. It’s amazing to find this place in the middle of London now!”

After her busy weekend, Maria is gearing herself up for two weeks at her London Club where she will be much in demand as the Chairman’s special guest.

“I’m really looking forward to it,” she said. “Somehow I’ll have to juggle the appearances with my job for TV Globo but it will all work out, I’m sure!” 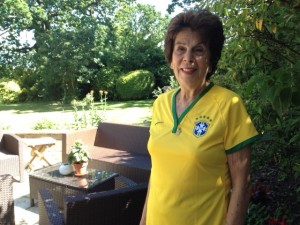 As for who is going to win this year?

“I have to fully study the draw,” she laughed. “I’ve been a bit busy! I’ll have to think about it a bit… I have been rather focused on the World Cup…

“Being the host nation, Brazil’s progress is so important and so far, so good. Wherever I go, I get asked about everything relating to the football so I have to keep up!

“I’m wearing my shirt whenever I can and now that England is out, there seems to be a lot of support for Brazil over here!”