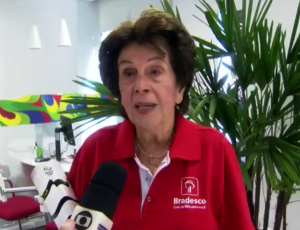 Britain’s Andy Murray won a double Gold medal in the men’s singles event at the Rio Olympics when he defeated Juan Martin del Potro from Argentina on Sunday, and he was watched by Maria Esther Bueno high up in the SporTV commentary box.

“It was an incredible match,” she said. “Very long – just over four hours, and very intense. For most of it, you had no idea who would win. 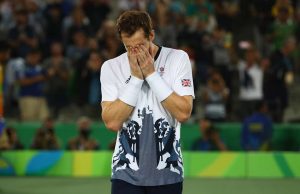 “In the end, [Andy] Murray managed to get over the line in four sets, but the credit should really go to Delpo for putting up such a battle after all the long matches he has played over the past week, especially after coming back from an extended time off due to injury.

“He must have been really exhausted. He certainly looked it between the points and he was getting slower and slower, but as soon as the ball was in play, he played incredible tennis!

“It was a fitting match to end the Olympic Tennis Event on. We’ve had a fantastic week of tennis here in Rio.” 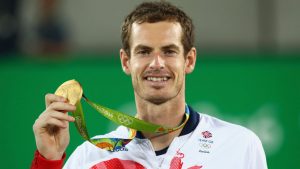 Murray became the first man or woman to win two singles Gold medals, successfully defending the Olympic title he won at London 2012 when he defeated del Potro, 7-5 4-6 6-2 7-5, in the best of five set final on the Maria Esther Bueno Stadium at Rio 2016.

”The crowd were amazing – the many Argentines chanting for Delpo while rather fewer Brits and lots of Brazilians cheered for Andy,” continued Maria Esther. “The atmosphere was electric!

“It was very emotional for both the players, as well as the spectators. We seem to have seen a lot of crying over this past week!”

It all ended in tears? 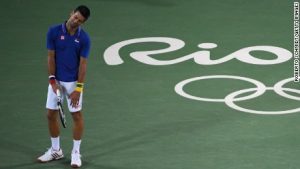 Despondent Djokovic, dispatched in the first round

World number one Novak Djokovic, who surprisingly lost to del Potro in the first round, left the court in tears after seeing his chance to add Gold to his trophy cabinet disappear for another four years.

He won’t be playing now until the US Open as he, too, nurses a wrist injury.

Delpo was also weeping after that first round victory, conscious of the battle he has fought to get back onto the match court after repeated injuries. 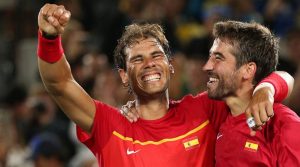 The same could be said for Rafael Nadal, who arrived in Rio not having played a match since Paris in May and with little expectations.

“Rafa can be proud that he won the doubles Gold with [Marcus] Lopez,” Maria Esther commented. “He also was an unexpected singles semi-finalist and narrowly missed out on the Bronze, which was a pity but still amazing.”

In fact, Nadal become only the second man, after Nicolás Massú [Athens 2004], to win a singles and doubles title at the Olympic Games.

“It has been a pretty historic week for Olympic tennis,” observed Maria Esther.

“Both Murray and Nadal’s achievements and a fantastic new women’s champion, winning Gold for Puerto Rico for the first time.” 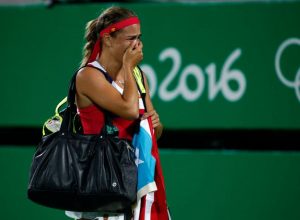 Monica Puig, whose women’s singles title gave Puerto Rico its first gold in any sport in Olympic history, had to overcome the world No 2, Angelique Kerber, from Germany as well as learning he nation’s anthem after her father emailed her the lyrics.

In the end she was too emotional to get out the words when it was played during the medal ceremony.

“If I would’ve stopped crying, I probably would have started singing,” Puig said. “But I couldn’t. I was choking up the whole time.”

In the run-up to Rio, there was plenty of discussion about the relationship between the Olympics and tennis, which returned to the program in 1988 after a 64-year absence, but watching and hearing those who did participate made clear what it meant to them. 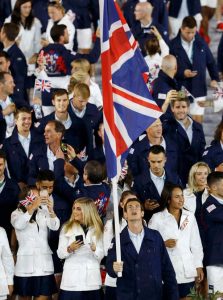 “It’s been a buildup of emotions over the last 10 days or so,” said Murray, who began the Rio Olympics by carrying Britain’s flag in the opening ceremony, then ended them by walking into his champion’s news conference with a Union Jack draped over his shoulder.

“And I’m just very happy that I got over the line tonight.”

His victory over del Potro stretched Murray’s winning streak to a career-high 18 matches, including a second Wimbledon title.

Murray has participated in the four most significant matches of the year: all three Grand Slam finals (losing to Djokovic at the Australian Open and French Open, then beating Milos Raonic at the All England Club) and the Olympic final.

“I need to try and keep that going,” Murray said. ”And the US Open is always the next big goal.”

Late on Sunday night he flew with Nadal in a private jet to play in Cincinnati on Wednesday ahead of the US Open in two weeks’ time.

“That’s a big ask,” said Maria Esther. “But he is on such a roll right now that he could just pull it off.

“He then has the semi-finals of the Davis Cup so it is a very tough summer for Andy Murray this year but he is playing the best tennis of his life.” 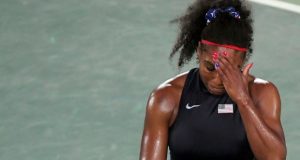 It is not entirely clear what went wrong for Serena Williams, who lost in the third round of singles and the first round of doubles with her sister Venus. She too left the scene in tears.

The sisters won Gold in all three of their previous Olympic appearances together and were looking for a repeat in Rio, but it was left to Venus to keep the family name afloat by reaching the mixed doubles final.

“It was an all-American mixed final,” said Maria Esther

“But it was Bethanie Mattek-Sands and Jack Sock who took the Gold, leaving Venus and her partner [Rajeev Ram] with the silver.

“Actually, the result never really looked in any doubt as they won in straight sets.

“She is the first in the family to get one of those [Silver medal], I think.” 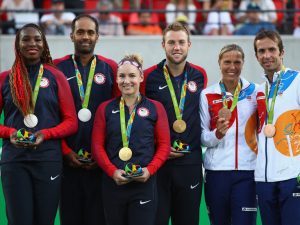 Despite what happened in singles and doubles to the Williams sisters, and even though the country’s highest-ranked man, John Isner, opted to skip the Olympics, the US wound up with the best haul: one Gold (Bethanie Mattek-Sands and Jack Sock in mixed doubles), one Silver (Venus Williams and Rajeev Ram in mixed) and one Bronze (Sock and Steve Johnson in men’s doubles).

The only other country to win three medals was the Czech Republic, with Bronzes from Petra Kvitova in singles, Lucie Safarova and Barbora Strycova in women’s doubles, and Lucie Hradecka and Radek Stepanek in mixed doubles.

The women’s doubles was also decided on Sunday, when Elena Vesnina and Ekaterina Makarova overcame Timea Bacsinszky and Martina Hingis 6-4 6-4 to win Gold for Russia.

The Russian duo, who endured a nightmare journey from their previous tournament in Montreal to the Brazilian capital, ended their week on a high with Russia’s only medal in the tennis at this year’s Games.

“We wanted the Olympic medal, especially Gold medal of course, since we were juniors,” said Makarova. “It was our dream from the kids. We really wanted to have a medal of Olympics.

“It’s much more for us than the Grand Slam. We were all the time talking about that, that Grand Slams are great tournaments, we’re so happy that we won two Grand Slams, but the Olympic Games for us means much more. We are playing for our country. We won the Gold medal. It’s an amazing feeling. Our dream came true.”

It is a third straight Olympic Games where Russia has won a medal in tennis and an eighth in total for the Eastern Europeans.

It was also just Hingis’ second Olympic appearance, coming some 20 years after her first.

“We’re there together to fight through thick and thin,” said an emotional Hingis after the match.

“It doesn’t matter. I mean, we’re one team, we’re one equipe. We made it on the court this far. I think we were very emotional in general.

“If it doesn’t touch you at the Olympic Games, where does it want to touch you? 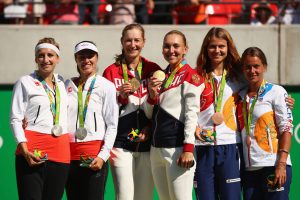 “I think this is the moment we can let go all the stress after this week. It’s done and over. All the happiness and emotions come through to you. I think that’s only human. That’s who we are. We’re proud of that, as well.”

The bronze medal in women’s doubles was decided yesterday in an all-Czech clash that saw Lucie Safarova and Barbora Strycova defeat Andrea Hlavackova and Lucie Safarova 7-5 6-1. 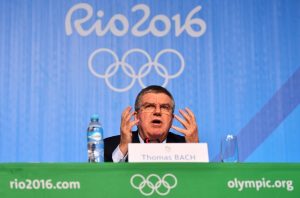 Thomas Bach, President of the IOC, faces the media at Rio 2016

Maria Esther had the opportunity to meet and chat with Thomas Bach, President of the International Olympic Committee on Sunday.

“It was a thrill to meet him, I must say, and it seems he was pleased to meet me too!” laughed Maria Esther.

“It was all by chance, actually, and he, in fact, spotted me and came over to talk to me when I briefly visited the VIP Box on my way up to the booth.

“Apparently he has been a huge fan of mine for years and he is thrilled the stadium is named after me!”

With the Olympic Tennis Event completed on time and in such dramatic fashion, it seems everyone is happy with the way things have gone.

“Despite losing a full day of tennis because of the rain, I think the organisers, most of whom are my friends from the Rio Open, did a great job in getting things back on track,” said Maria Esther. 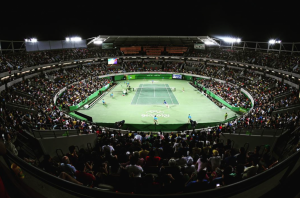 “I was so proud of the stadium over the weekend, particularly when it was full. It was fantastic and it is now the biggest court in Brazil!”

The stadium, which will get its official name put up after the Olympics, seats 10,000 people and offers state of the art facilities for all, including a level of hospitality suites.

“Some things will change in the Tennis Center,” added Maria Esther. “The two other show courts, courts 1 and 2, are temporary structures and will go but the outside courts and the stadium will remain and will become the national center for the sport in Brazil.

“It is a fantastic legacy for Brazilian tennis.” 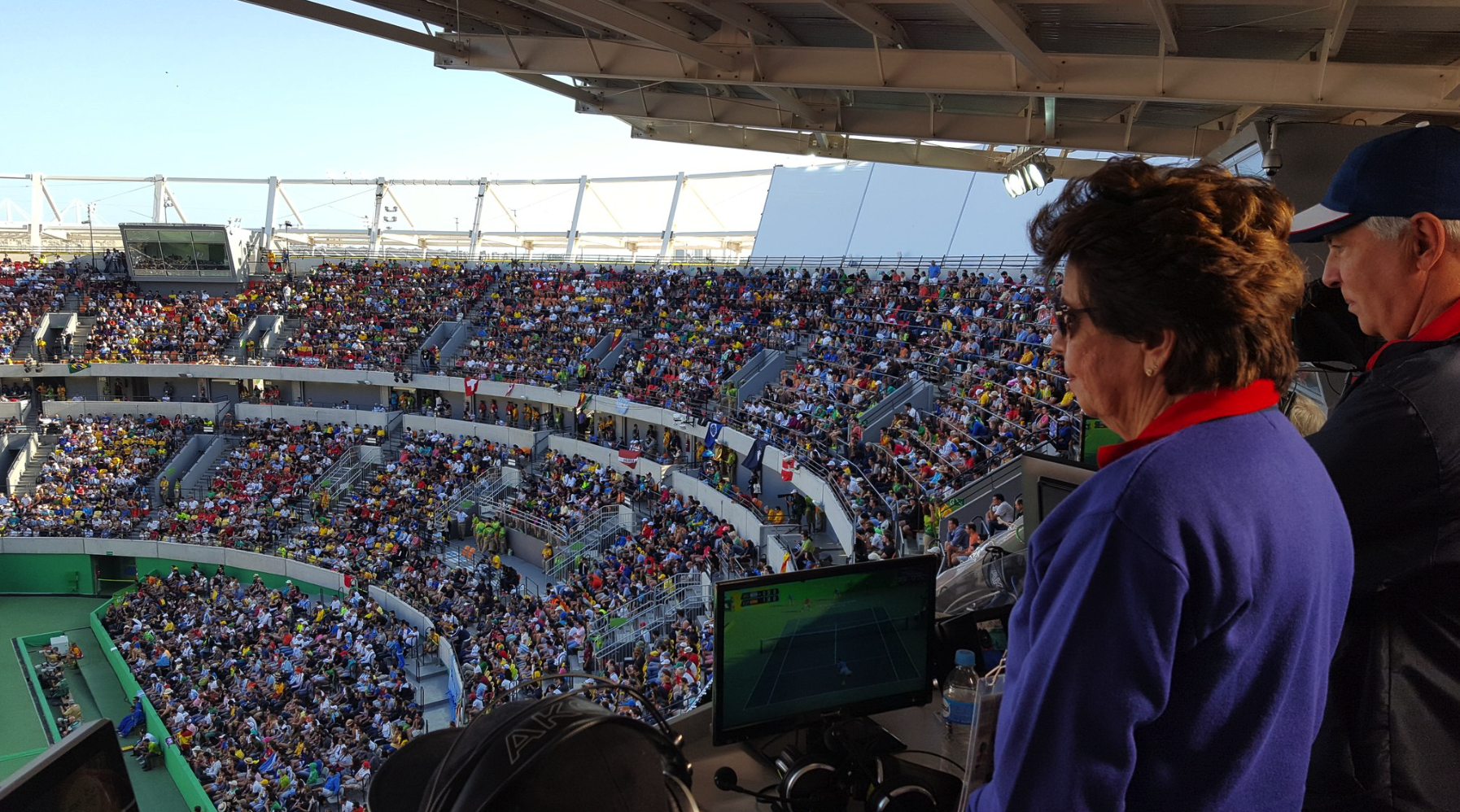 ← What a winner!
Opening the Olympic Closing Ceremony! →