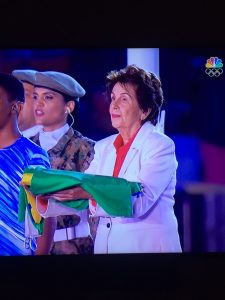 The 31st Olympic Games came to an end on Sunday night and Maria Esther Bueno had the honour of opening the vibrant ceremony at Rio’s Maracanã Stadium with great aplomb.

“It was the proudest moment of my life,” she said. “I was supposed to be smiling but I was so emotional standing there, holding the Brazilian flag as the choir sang our national anthem, that I just couldn’t!”

The segment opened the final proceedings with Maria Esther standing on the platform with the folded flag, which she presented to the audience and then handed to the Brazilian Army Major alongside to pass on to the Colour Guard, who hoisted it high on the flagpole alongside the Olympic flag.

The Youth Choir sang the Brazilian National Anthem as a giant rendition of the flag appeared around them on the video floor of the stadium.

“We all faced the flag as it went up and it was an incredible occasion,” she added.

As the anthem came to a close, the individuals in the choir moved to various new positions to form the stars on the flag as the spectators in the stadium cheered.

“It was just fantastic!”

A Samba Party in the rain 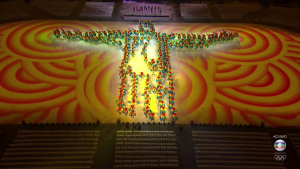 Dancers form a tableau of Christ The Redeemer

From choreographed dances and musical performances to fireworks and Japan’s Prime Minister Shinzo Abe getting a helping hand from Super Mario, the athletes and dignitaries bid farewell to the 2016 Games and conducted the handover ceremony for the 2020 Games in Tokyo.

Samba dancers, singers, drummers, and a giant plumed macaw float mixed with hundreds of athletes in the storied Maracanã stadium, while a volley of fireworks lit up the sky.

“We had rehearsals earlier in the day and went through it all at least ten times,” Maria Esther said.

“It was an incredible stage production and it was all organised very well. It was fun meeting everyone and seeing them warm up. It was such a shame the weather was so bad.

“Backstage they had make-up people, hair dressers, costume makers and goodness knows what else.

“Lounges and catering for the masses of performers.”

A blustery storm added a touch of melancholy to the proceedings but the sense of pride Brazilians could take from having pulled off South America’s first Games so successfully was tangible to the worldwide audience.

Brazil could well draw a collective sigh of relief after a gruelling 17 days of competition during which the organisers struggled with empty venues, security scares, and a mysterious green diving pool.

The athletes entered the arena together, led by Greece in accordance with tradition.

Before the huge Carnival-like party got going, Thomas Bach, the IOC President declared the Rio Games closed and expressed hope that they had left a lasting mark on the metropolitan area of 12m people.

In a final symbolic act, the Olympic flame that had burned since 5 August was extinguished in a downpour of artificial rain. 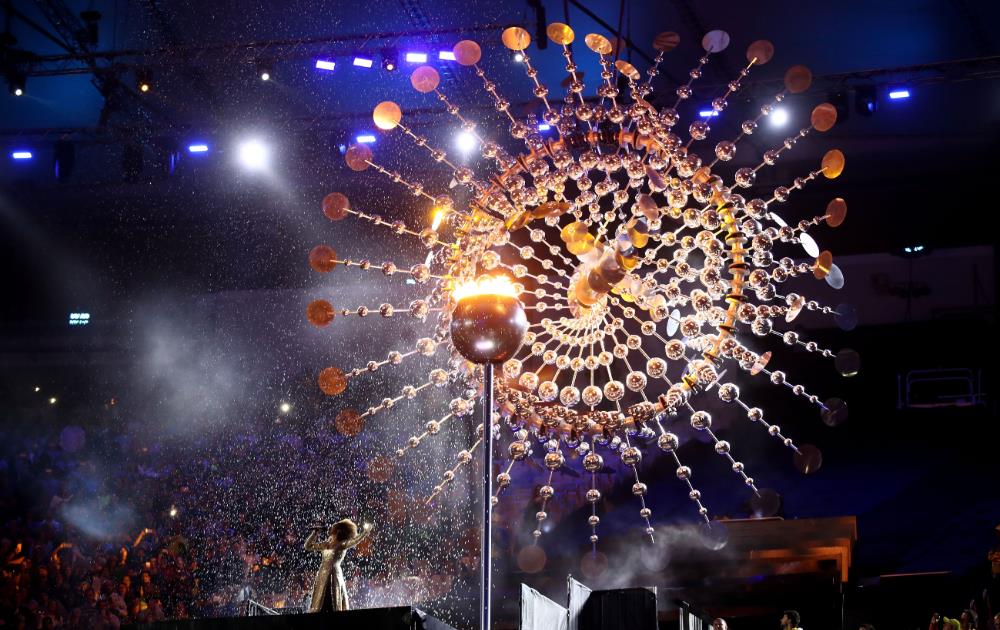 The Olympic Flame is extinguished

A beacon for the future 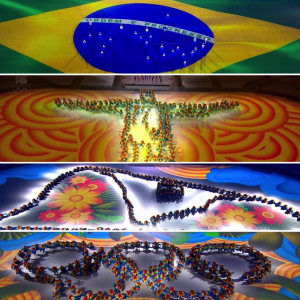 In the midst of the worst economic recession since the 1930s, Brazil’s opening and closing ceremonies relied more on the country’s unique talents and natural beauty and less on expensive technology.

“There were no major mishaps or breaches of security,” reflected Maria Esther. “Thanks to the extra security, which made it difficult to get around. We are relieved nothing awful happened.

“With all our problems, we pulled off a great Olympics, I think. One that has brought the country a little closer together, I hope.”

One of the major concerns for Brazilians is the final cost of the Games and how much they have actually helped improve Rio’s infrastructure when many residents could not afford tickets to events, leaving them feeling on the sidelines of the city’s biggest undertaking.

“That was a great pity,” Maria Esther said. “That the locals stayed away, some in protest and others for economical reasons.

“Brazil has many problems to face now and the legacy of the Games will hopefully be appreciated more down the line in future years, when we can look back with pride at what Rio achieved here.”

These are times of political and economic crises for Brazil with an impeachment vote in coming days that could lead to the permanent dismissal of suspended President Dilma Rousseff.

Interim President Michel Temer, who was booed at the opening ceremony, decided not to attend the closing event.

When IOC President Bach declared the Games closed to mark the official end of the sporting spectacle, more than 11,000 athletes from 205 countries had competed in 42 disciplines.

“I declare the Games of the 31st Olympiad closed. In accordance with tradition, I call upon the youth of the world to assemble in four years time in Tokyo, Japan to celebrate the Games of the 32nd Olympiad,” Bach said to the huge applause of the packed gathering at the iconic Maracanã Stadium.

The Olympic flag was lowered and handed over to the representative of Tokyo 2020, the Governor of Tokyo Yuriko Koike, the next host of the Games.

Japanese Prime Minister Shinzo Abe made a dramatic entry in a high-tech show, a trademark of the far eastern country, during a short but impressive performance titled ‘See You in Tokyo’.

The athletes braved harsh winds, accompanied by torrential showers, and enjoyed the festive atmosphere of the closing show, sporting translucent raincoats and singing, dancing and taking selfies during the nearly three-hour-long closing ceremony. 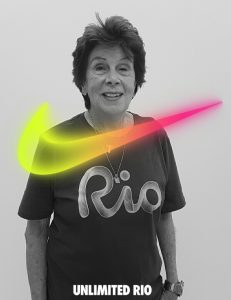 “My appearance was right at the beginning and the organisers arranged for a car to take me back to the hotel,” said Maria Esther.

“I was really able to enjoy the marvellous show put on by the production company. It was fabulous!”

“They were a wonderful crew. Very friendly and helpful. It was a pleasure working with them all.”

Early the following day Maria Esther was fortunate to be given a ride home to São Paulo on a friend’s private jet.

“Even that got delayed,” she said. “I’ve never seen so many people at the airport where security was tighter than ever. They checked over every private plane and we were held up by traffic control but we eventually got out!”

Maria Esther now has a few short days to prepare for her duties at the US Open, which starts this coming weekend. 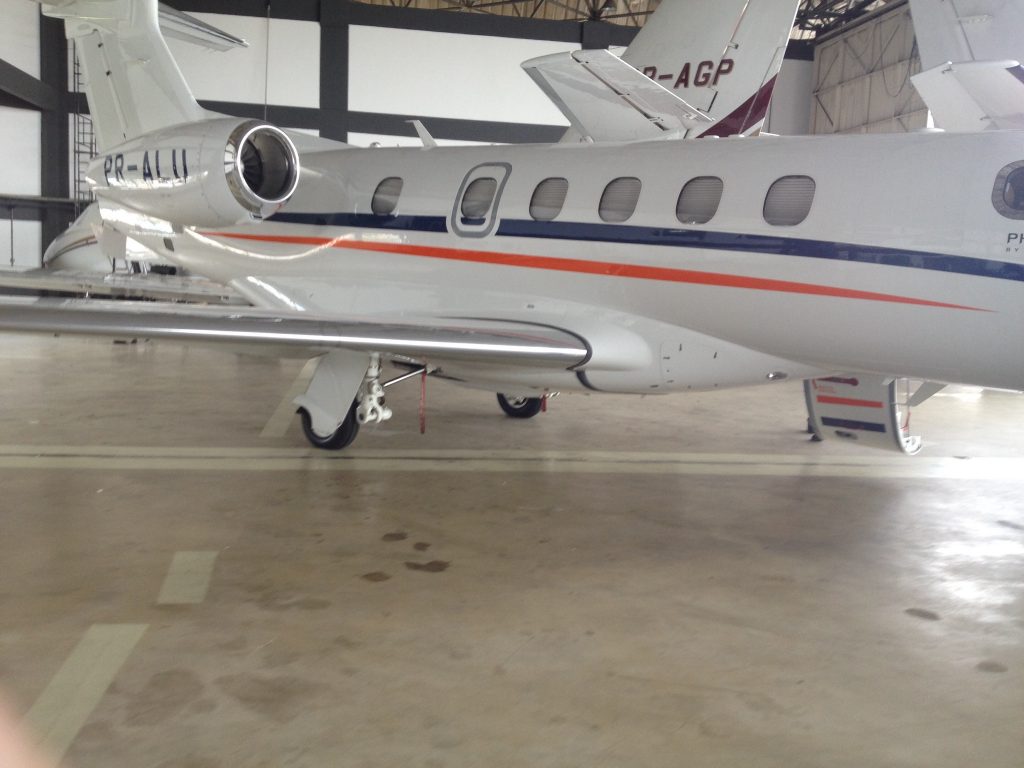 This is the way to travel! 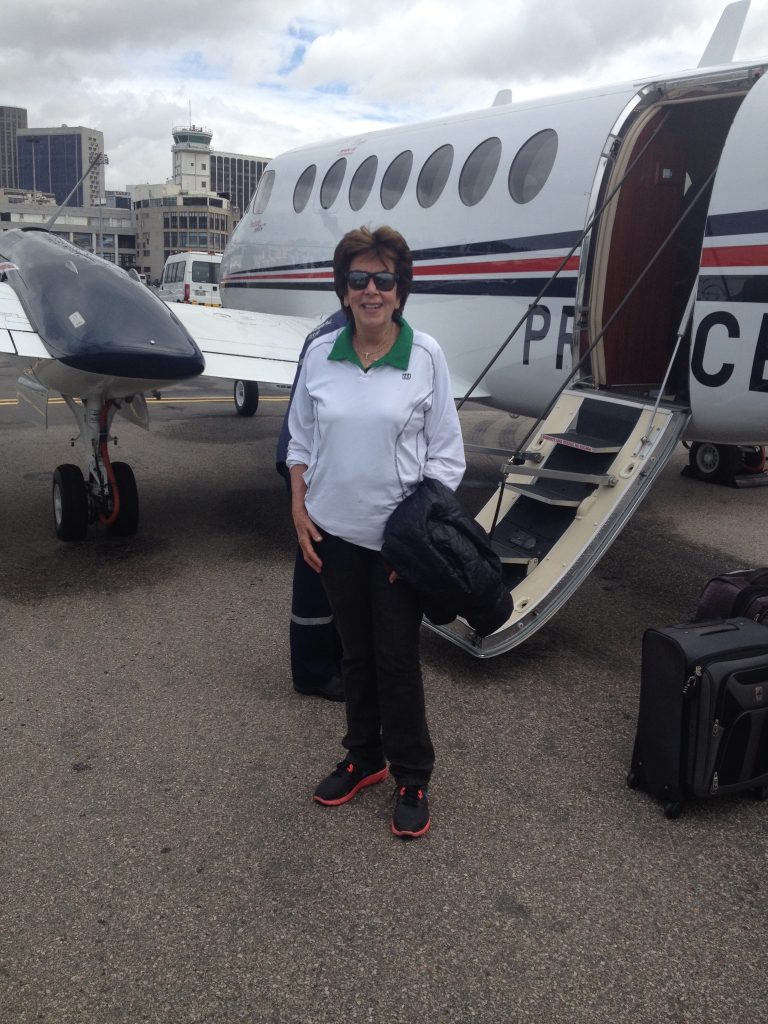 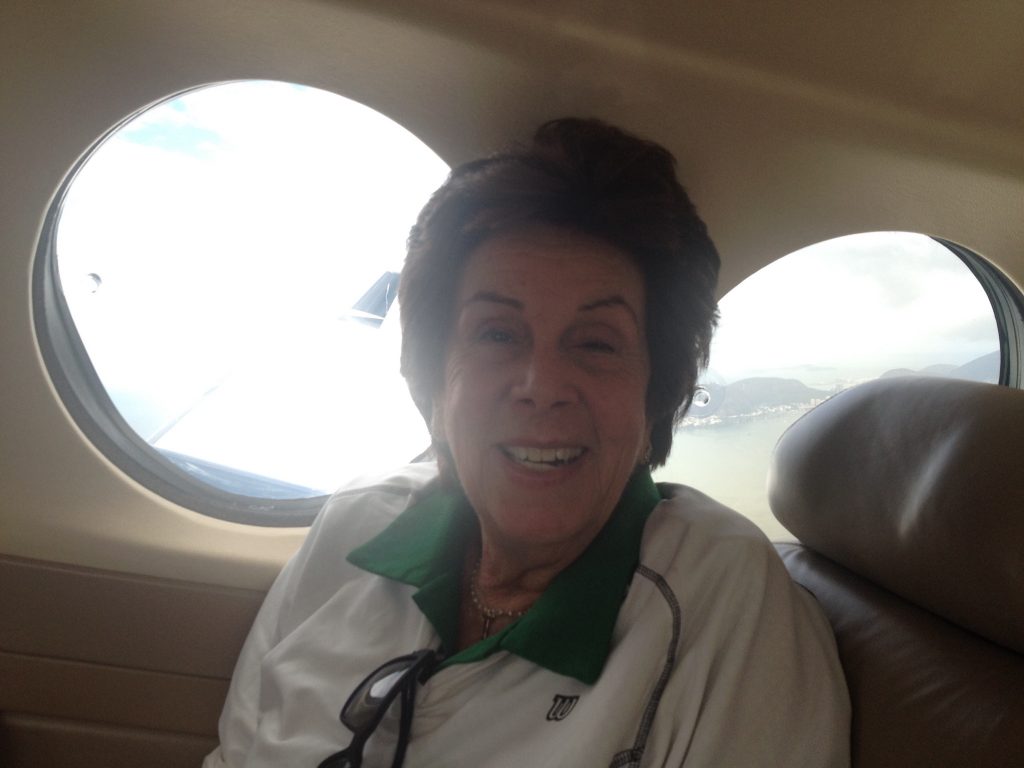 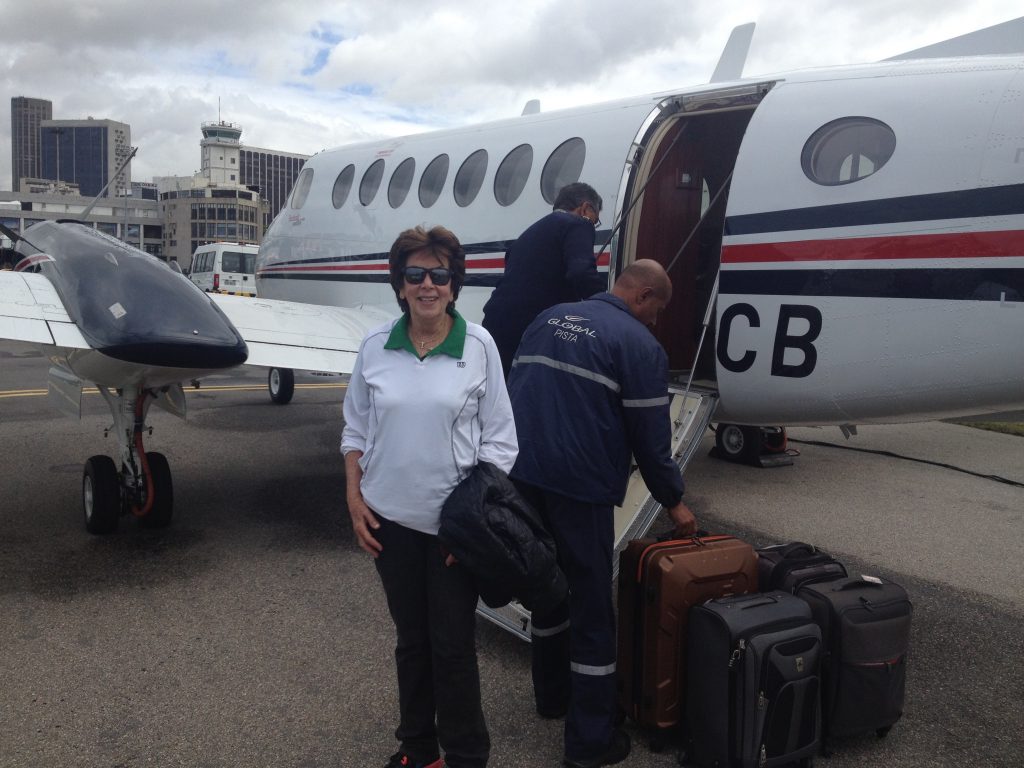