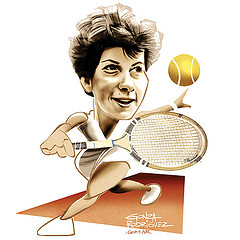 We include this wonderful caricature of Maria for no particular reason other than it is new to the website!

It has been a busy month for mariabueno.org as we have completely revamped the website and been offline for a while as we got everything in place.

We hope you like the new format, which gives us more flexibility and, hopefully, now easier to read.

You will find some interesting new features as we have added some video links > Click HERE.

Meanwhile, Maria, of course, has also been keeping very busy. 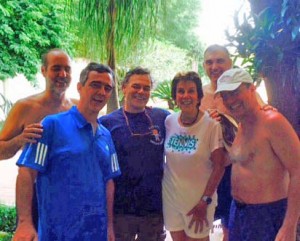 Maria with a group of friends in Rio de Janeiro

After the Brasil Open she was much in demand with interviews and appearances and then flew back to Rio de Janeiro to cover the ATP 1000 event in Monte Carlo, live from the TV Globo studios.

“That involved some very early starts for us because Monte Carlo was six hours ahead of Brazilian time,” she said. “But it then gave me a chance to meet friends later in the day and to have a hit.”

Before that she had photoshoot for Mitsubishi Magazine, a lifestyle publication with a massive circulation.

“That also happened very early because the photographer wanted the softer light of dawn as opposed to the harsh light of later in the day,” Maria explained. “We were at the club [Harmonia] at 6am to get what he wanted and it took about two hours.

“I can’t wait to see the finished article!”