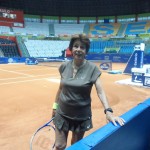 Maria is having another busy week. Hot on the heels of the Rio Open last week is the Brasil Open in her home town of São Paulo.

“There wasn’t any real recovery time,” admitted Maria. “I just about managed to get some laundry done before getting into things here…”

From clay outdoors to indoors 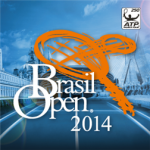 After 11 successful years in Costa do Sauipe, the Brasil Open moved in 2012 to São Paulo, where it was first played at the Complexo Desportivo Constâncio Vaz Guimarães.

The ATP World Tour 250 clay-court tournament also moved from outdoors to indoors due to regular wet weather in Sao Paulo in February.

It is now being held at Ginásio do Ibirapuera where local favourite Thomaz Bellucci reached the semi-finals before losing to Argentina’s Federico Delbonis, who ousted Nicholas Almagro in the second round. 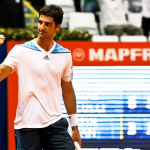 “Thomaz got a wild card for the tournament and made very good use of his chances,” said Maria. “He should now get back into the top 100 as a result of his two good runs in Brazil.”

Top-seeded Tommy Haas had to retire with a shoulder injury while losing 6-3 3-2, to Paolo Lorenzi in the other semi final, saying he felt a lot of pain in his right shoulder when he slammed his racket to the ground in frustration after losing his serve at 3-3 in the first set.

He kept playing despite needing medical treatment several times, but gave up after going down another break in the second set.

“It was unfortunate because he really didn’t need to let his frustrations out that way,” noted Maria. “There’s a lesson in there somewhere, although I do know how it is to be temperamental on the court!” 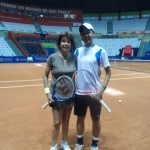 Maria enjoyed hitting with Renan Hanayma, who is 17 years old and one of the best juniors in Brazil.

He lost in qualifying for the ATP tournament and opted out of competing in the junior championships at the Australian Open because he is studying to go to Harvard.

“The tournament made quite a thing about it, sending a car to pick us up and arranging for the TV to make a small feature of it,” said Maria. “It was fun!”

Renan’s mother told Maria that she was an idol of her son’s and that to have the chance to hit with her at Ibirapuera was a dream come true.

“We hit together unbelievably well and both of us enjoyed it,” said Maria. “I think we’ll be hitting some more over the coming weeks, which will be great.

“I’m not sure what I’ll do with myself once this is all over. It will be back to the daily routine, I suppose, until I start travelling again.

“It has been really great having the tennis here in Brazil as it has lifted the profile of the sport ahead of the Olympics in 2016.

“It’s also been good to see our Brazilian players doing so well too, so, all in all, it has all been a great success.” 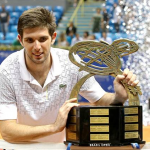 At the last it was Federico Delbonis, ranked 61 in the world, who took the honours at the Brasil Open on Sunday with a three-set success over Italy’s Paolo Lorenzi.

The win saw him fulfil some of the potential he had shown in beating Roger Federer in the Hamburg semi-finals as a qualifier last July.

“It was a  close match, a little over two hours on court,”  said Maria. “And not clear until the end who would win.

“Federico will now be ranked around 45 so this has been a vary good week for him.”

Maria commentated for SporTV all week and, once again, showed appreciation for the whole team, who worked long hours to make the transmissions as seamless and as enjoyable as possible.

“They are a great team and it, as always, we’ve had a good time working together,” she said. “It gets a bit tense at times, because we are live on air and things don’t always go to plan but we help each other out and have a good laugh!

“Until the next time, crew! I look forward to it!”

← A BRAZILIAN TRIUMPH
A BUSY MONTH →