Wonderful new facilities at US Open: 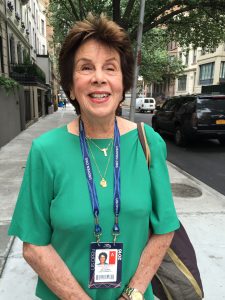 Maria Esther Bueno is in New York for the US Open where the new facilities out at Flushing Meadows are impressing her.

“The roof over Arthur Ashe Stadium is amazing and came into play for the first time last night [Wednesday], guaranteeing the crowd and the [worldwide] TV audience play, which is just great,” she said.

“The USTA has done a lot of work on the site over the past 10 years and this year it is really paying off.

“The new Grandstand is a lovely court seating around 8,000 people and they have put this a the [south] end of the site, opening up the grounds so it doesn’t feel so crowded.

“I thought there were less people at the Open this year, but I now realise they are just spread out more!

“They have also put in more seating on the field courts, made more food stands and so on so people are more comfortable.” 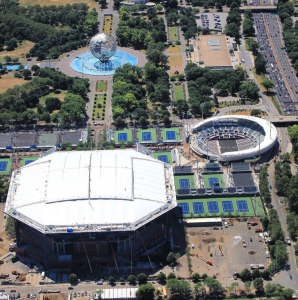 The USTA says between 36,000 – 40,000 people a day come visit the US Open and every person potentially has a seat somewhere.

Arthur Ashe Stadium has a capacity of 23,771 and often looks pretty empty during the first week when play takes place all around the grounds but is packed for the night sessions.

“When you see matches on TV, the stands look half full because there is now so much choice, I suppose,” Maria Esther continued.

“The atmosphere on Ashe at night is very special and I’m told the court plays quite differently now that there is a roof, even when it is open.

“Players are saying there is no wind anymore and the court is in full shade by around 3pm so the conditions are perfect for play – rather like an indoor court.

“I’m not sure it is so good for the players early on, because of the contrast in conditions to playing outside on the other courts, but I’m sure it will make for great tennis as we get into the later stages of the tournament.”

The loudest cheers so far came on Wednesday night when the roof was closed for the first time. 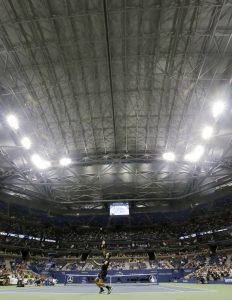 Two-time US Open champion Rafael Nadal, who was the first to practice on the ‘new’ Ashe, became the first player to play with the roof closed, making it into the history book.

With spitting rain falling on Nadal’s match against Italian Andreas Seppi as he led 6-0 3-3, Tournament Referee Brian Earley ordered the roof to be closed for the first time ever.

Roars went out throughout the crowd, one fan shouting: “We’re witnessing history!”

Chair umpire Cedric Mourier of France made the announcement: “Ladies and gentlemen, the roof is to be closed.”

The roof began closing over the stadium at 10:38 pm ET and took a total of five minutes, 35 seconds to close. Play resumed after a total delay of just seven minutes and 22 seconds.

“We had a bold vision for transforming this entire facility and the roof was a huge part of that,” said USTA Executive Director Gordon Smith. 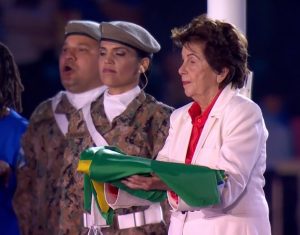 “I can’t believe how many people saw me at the [Rio 2016] Closing Ceremony,” said Maria Esther.

“When I arrived at JFK on Sunday, the passport control officer said – ‘it’s you! I saw you wearing the white suit at the Olympics!’. It was amazing!

“So many people have come up to me since to say how much they enjoyed it all and that they saw me with the flag.

“It was all such an incredible experience for me and it seems a bit of a dream to me now, to have played a part in the Olympics in Rio.

“In spite of all the problems, all the bad press over Zicka, the violence, Rio put on a fantastic Olympic Games, I think. Everyone I meet seems to think so too.” 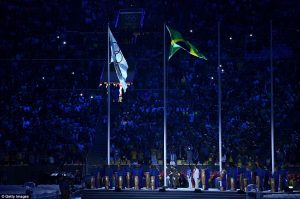 It is hardly surprising that so many saw Maria Esther proudly holding the Brazilian flag as the national anthem rang out across the Maracanã Stadium to open the Closing Ceremony because the television coverage extended to over 200 countries and hundreds of millions viewers worldwide.

“The Olympics have the biggest television audience of all and I think the coverage provided by TV Globo for IOC Broadcasting and Brazil was very good. Another thing to be proud of.”

As for the Maria Esther Bueno Tennis Stadium, it also came through with flying colours.

“All the players liked to play i my stadium and the spectators enjoyed watching them there so that is what matters,” she said.

“It also became one of the symbols of the Games since it was on camera many times a day as the main structure in the Olympic Park.” 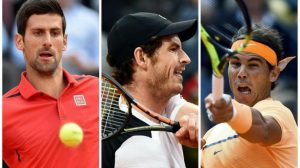 “Well, it is early days yet but in the men’s, you still have to go with [Novak] Djokovic, Andy Murray and Rafa [Nadal] as the main contenders, and possibly [Juan Martin] del Potro,” Maria Esther Bueno said on Thursday morning.

“[Milos] Raonic lost yesterday [Tuesday], as have some of the others who weren’t in Rio.

“I find this interesting, that the players who decided not to play the Olympics are not doing so well here.

“During the Games there wasn’t one word about Zicka. Did you notice?

“In the women’s draw, the biggest shock is the loss of [Garbiñe] Muguruza but she has lost confidence since winning Paris so perhaps it is not so surprising.

“I do find it extraordinary that players these days manage a big win but cannot sustain any form afterwards.

“It certainly wasn’t like that in my day. A big win gave me confidence. It didn’t make me nervous…

“Perhaps it has more to do with the rankings points and expectations, or even the money. I don’t know, but until someone can follow through with a consistent run of wins, we won’t see a big star like Serena or Venus [Williams] again.”

Do you see Serena winning a seventh US Open title?

“She has to be the favourite, but Angelique Kerber seems to be finding some consistent form and she beat her in Australia so could well do it again here on hard courts if she can make the final. 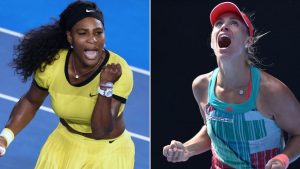 “I think Kerber is a big match player but there are dangerous opponents on the way and there is pressure on her too as she could well take the No 1 ranking if she reaches the final.”

“There’s always a chance, you never know. She is not as dominant as she used to be,” said Maria Esther.

“She has her ups and downs these days and is less predictable than before. You never know which Serena will turn up.

“So far she has looked very good but, as I said before, it is early days here and a lot can happen.”