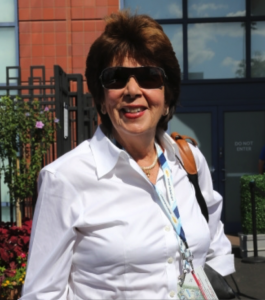 Maria Esther Bueno was honoured on Wednesday night during the Final 8 Dinner held in the President’s Box ahead of the night session of the US Open.

Katrina Adams, Chairman, CEO and President of the USTA, welcomed her and Australia’s Fred Stolle as US Open special guests in celebration of 50 years since they both won the US Championships held at The West Side Tennis Club at nearby Forest Hills.

“We celebrate your successes and thank you for what you have brought to tennis over the years,” she concluded in bringing her address to a close.

“We are pleased to present to you your [respective] picture that is up on the wall [over there] once the US Open is over.” 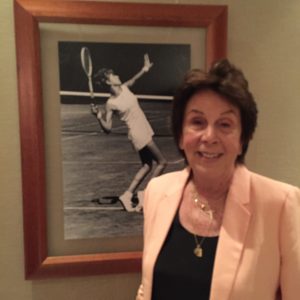 Maria Esther was very touched by Katrina’s remarks and at having her last US title acknowledged in front of such a illustrious group of players.

“It is wonderful to be remembered and to be honoured,” she responded to the room full of players who have reached the quarter-finals of the singles, doubles and mixed at the US Open.

“I have had an incredible year and this is the final touch.

“I had the honour of being a small part of the Olympic Games in Rio [de Janeiro], to have the new tennis stadium there named after me, to run with the torch and to hold the [national] flag to start the Closing Ceremony.

“I never thought I would have such an opportunity because, as you know, tennis was not part of the Olympics when I was playing.

“To have my 1966 final remembered too is very important to me and I really appreciate it.

“Thank you very much.”

TV Globo / SporTV made a special documentary tribute on Maria Esther to coincide with the occasion, and were on hand at the dinner to record the special occasion.

“We filmed almost all day on Saturday, starting with me hitting at Town Tennis Club with Jonas [Mouly, the pro there] and then visiting Forest Hills, where we spent around three hours at the [West Side Tennis] club, walking all around,” she said. 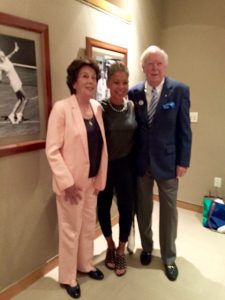 “It was very emotional for me to be there after so long. In many ways it hasn’t changed at all – the stadium is still there, the grass courts are still there and so is the clubhouse – but it also felt very different. I suppose we have got used to Flushing Meadows now!”

The documentary was aired nationally in Brazil on Wednesday and Thursday and was very well received by all accounts received.

“I thought it was very sweet that Bruno [Cortez] said in the film that they were so happy working with me as a colleague that they forget what I have achieved and what I represent in terms of the history of the game!

“We make a great team, I think, for the tennis on SporTV.”

A tournament of upsets 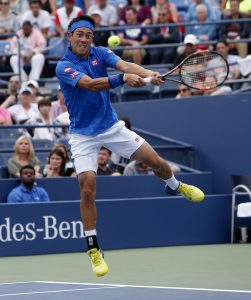 “As I said last week, you never what is going to happen in tennis,” remarked Maria Esther on progress at the US Open.

“Who would have thought that Andy Murray would not be featuring in the final, as we expected after the amazing run he has, winning Wimbledon and in Rio.

“[Kei] Nishikori played so well against him and was very up for the win – returning and serving unbelievably well, and covering the court with amazing speed.

“Murray looked out of it, very down, even uninterested, which I’m sure he wasn’t, but it doesn’t help you to play better if you drag yourself around. 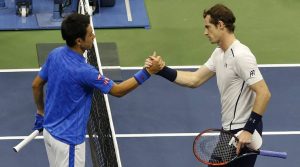 “He must have been exhausted after his long summer and still has Davis Cup to play next weekend!

“Then there was the shock of Serena [Williams] losing to [Karolina] Pliskova last night.

“She isn’t used to facing a serve like that and I think only got one break point against her the whole match which, for Serena, is impossible.

“Pliskova is very tall and has good groundstrokes, specially her forehand, and she didn’t seem to be at all intimidated by Serena.

“In her mind, Serena has had a bad year but she did win Wimbledon and got to other major finals and a semi here which isn’t too shabby.” 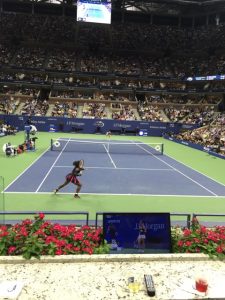 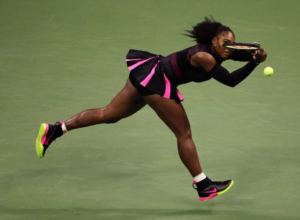 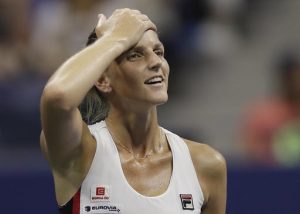 What does she expect over the weekend? 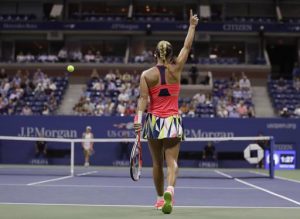 “Well, Angelique Kerber has come through to the final as expected and is now the World No 1,” continued Maria Esther.

“She has looked impressive all tournament and must be relieved not to have to play Serena although her record against Pliskova isn’t so good. She lost to her in the final of Cincinnati just before the Open when she would’ve got to No 1.

“I still think she will come through because she is very confident and has been in three major finals this year, winning the one in Australia in January.” 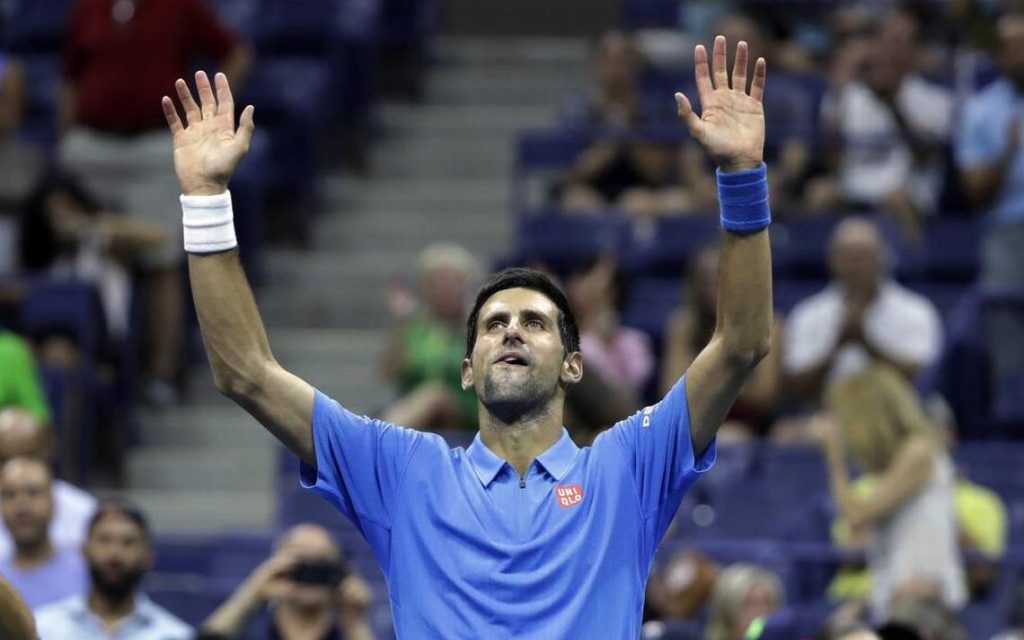 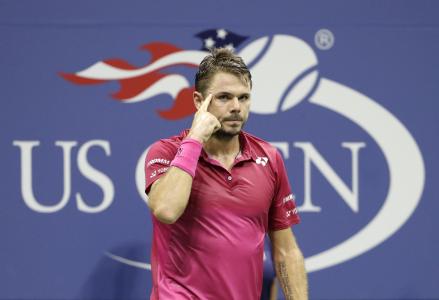 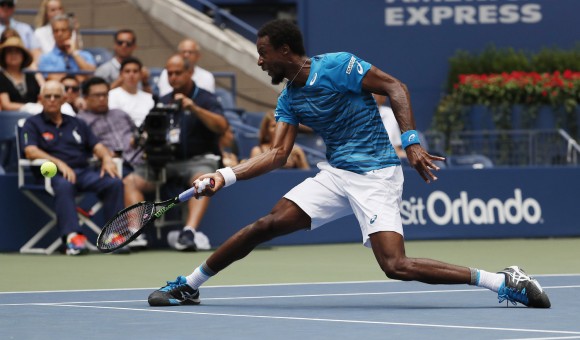 “As for the men, [Novak] Djokovic has hardly played! He was beaten early at Wimbledon and in Rio, managed to win Cincinnati but has had a walkover here in new York plus two retirements… I think that could be a problem, not having played many matches of late.
“He plays [Gael] Monfils and I don’t think he has ever lost to him so will probably get to the final.

“The other semi is between Stan Wawrinka and Nishikori, which could be very tight.

“Stan has beaten Novak at the French so he knows he can do it, and Kei faced him here in New York and lost so will want to change that.

“I hope Nishikori does well because he has such a great attitude on the court. He stays positive and never gives up, just keeps trying and trying.

“It will be an interesting weekend for sure!” 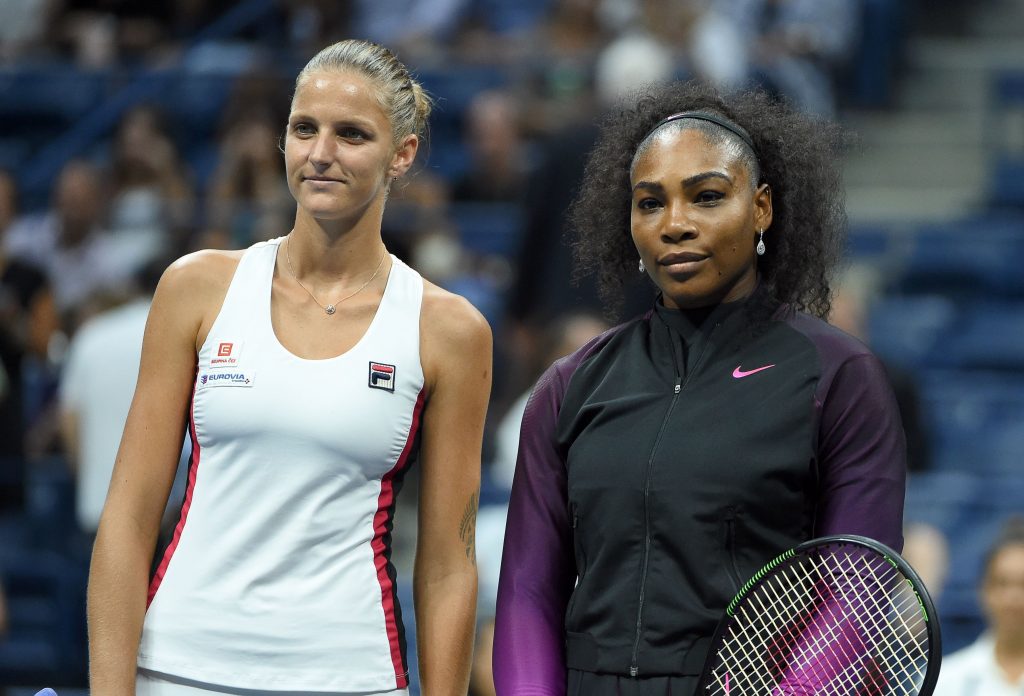 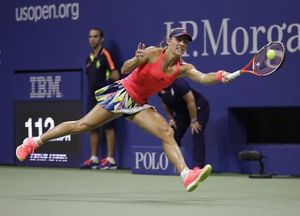 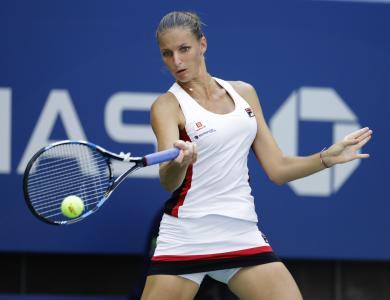 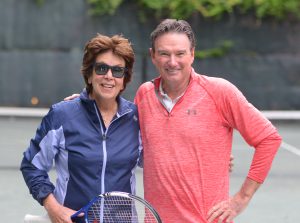 Maria Esther has been doing the rounds at Flushing Meadows and in the city during the US Open.

Amongst her many appearances, she visited Wilson and Maui Jim, and played several times at Town Tennis Club in mid Manhattan.

“I am so lucky to have clubs I belong to all around the world!” she said.

“They make me feel very at home at Town Tennis and it is a very special place, very unique, I think.

“The pros there compete to hit with me, which is really nice!

“I’ve had a chance to catch up with lots of people, including Jimmy Connors, who looks in great shape these days. 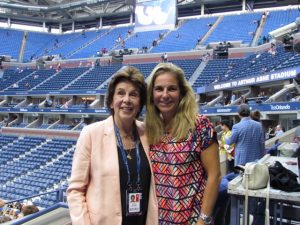 “I’ve also made new friends all over the place and hosted a few from back home too!”

Maria Esther attended the Wednesday Barbecue during the first week of the Open and enjoyed the lavish spread produced by new Chef, Jeff.

“It was so nice to be there with many of the members and my friends for many years – Robin Miller, who is the Vice Chairman of the club, and her mother, Merna.

“We always have a good time together!” 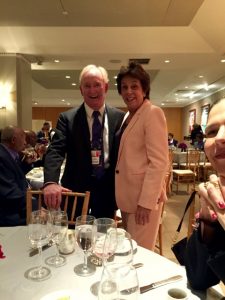 She also met up with Nick Bollettieri and Steve Shulla, who manages the IMG Academy in Florida, at the Maui Jim reception held out at the US Open.

“I got really good sunglasses too, which have fantastic lenses and help my eyes. They’re really good,” she added.

“There were lots of pictures taken and everyone had a good time.”

At the Last 8 Dinner she caught up with Rod Laver and other players.

“It is always nice to come to the US Open.”

← Attending the US Open
Great finals at US Open →