The teens were the two finalists of the 2019 Maria Esther Bueno Cup, inaugurated in memory of Brazil’s superstar, who died on 8 June 2018.

The event is a tribute to one of the biggest names in Brazilian sports that privileges the promising young talent the country offers.

hosted by the Rio Open at Sociedade Harmonia de Tênis, her home club in Sao Paulo, the tournament brings together the country’s best tennis players aged up to 23 years old based on the men’s circuit rankings. 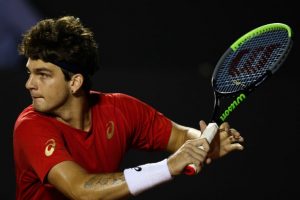 Wild was the runner-up of the MEB Cup in Sao Paulo but, here in Rio, he scored his first win at an ATP 500 event.

In the longest match at the tournament, Wild defeated Spain’s Alejandro Davidovich Fokina after saving 3 match-points to advance, 5-7 7-6(3) 7-5.

The match between the two ATP Next Gen players lasted 3 hours and 50 minutes, 31 minutes longer than the previous record in Rio, which was the match between Jaume Munar and Cameron Norrie in 2019.

“I’m very happy with this win and that shows me that I’m on the right way. Playing at home is always great and an advantage, specially on a tense and long one as this”, said 19-year old Wild.

“It was a very tense match, I did everything I could to win,” said Fokina. “I had some opportunities but didn’t take advantage of that.

“It was a very long match but it was a good practice to play at Roland Garros, because there I have to play five sets and here it was three. I fought till the end but couldn’t win.”

The crowd, unsurprisingly, was behind the Brazilian, who won the US Open boys’ singles title in 2018.

The Spaniard, a NextGen finalist, however, was cast in the role of pantomime villain.

Wild, the World No 206, started the match brilliantly, but the Davidovich Fokina’s heavy use of drop shots began to pay off and when the Brazilian served for the first set at 5-4, he was broken to love.

In the next game Davidovich Fokina used of an underarm serve, perhaps not his smartest move, and the crowd howled at him.

He did go on to win the first set, but it made him enemy number one on the Rio show-court where, for the remainder of the match, the crowd cheered every winner from the racket of their man along with the unforced errors, double faults and anything else that the Spaniard did wrong.

To his immense credit, Davidovich Fokina fought back when Wild served for the set and, at 6-5, he found himself with 3 match points to get out of the arena with a vital victory.

Wild saved the first with a huge net cord, and the second with a well-executed one-two punch off the serve.

On the third, Davidovich Fokina charged forward to chase down a drop volley and almost dismantled the net, and himself, in the process, striking long in the process.

Wild used the momentum to take an early lead in the tiebreak, and when Davidovich Fokina dumped a serve into the net, the Rio crowd exploded with delight.

The 20-year-old Spaniard then threw in another underarm serve and although Wild complained to the umpire that he wasn’t ready, the Brazilian managed to snatch the second to force a decider after almost 3 hours of play.

That proved to be a see-saw affair, in keeping with the match, with the pair exchanging early breaks.

With the crowd still firmly behind him, Wild hung tough to break decisively and sealed a famous win, just the second of his career at tour-level. 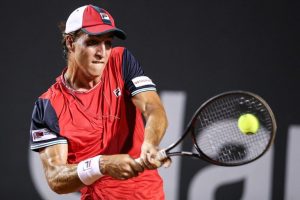 Meligeni put a scare into the top seed and favourite to win this year’s edition of the Rio Open, Dominic Thiem, by taking a set before the Austrian saw him off, 6-2 4-6 6-1.

Thiem, currently the World No 4, needed 2 hours and 4 minutes to come through at the Quadra Guga Kuerten.

It was the Austrian’s first match since reaching his third Grand Slam Final a few weeks ago at the Australian Open when he was defeated by Novak Djokovic in 5 sets.

On Tuesday night at the Jockey Club Brasileiro, he suddenly felt a sharp pain in his left knee.

“I was really worried because I never felt a pain like that in my life,” said Thiem, who called for a medical treatment.

“I hit a door here when I arrived but I didn’t make much of it because I didn’t feel anything during my warmup.”

Although he lost the second set, he had no trouble winning the third to advance to the second round.

“I’m very happy with the way I played on the first and third sets and Felipe played unbelievable tennis on the second.” 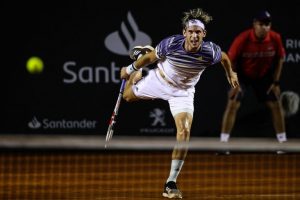 Three years ago the Austrian won the event without dropping a set and remains to this day the youngest ever Rio Open tournament winner.

“I really loved the atmosphere on the central court today,” added the Austrian. “Of course the crowd was cheering for Felipe, but that’s normal.

“Since I won my title here I have a special relationship with the fans and the organisation of the tournament, and that’s why I keep coming back.”

It was the first time in his career that Meligeni, rankedNo 341 in the world, had faced a Top 80 player.  is currently .

“I’m extremely happy with the way I played today and playing at the central court with the crowd rooting for me was amazing. I gave it all and to be honest I never thought I could even win a set”, said the 21 year-old, who hopes to reach the Top 150 by the end of the season.

“Dominic was really nice after the match and came to talk to me. I’ll forever remember this game.” 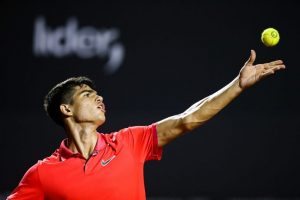 The youngest player ever to compete in the main draw of the Rio Open is 16-year old Carlos Alcaraz, who upset fellow countryman Albert Ramos-Vinolas, 7-6 (2) 4-6 7-6(2), in a battle that last 3-and-a-half hour battle and ended at 3 am.

This is also the first time the young Spaniard has taken part of the main draw of an ATP-500 event, and his first win at an ATP tournament.

“I’ll remember Rio for all my life now,” he said right after defeating his 32 year-old compatriot.

“I’m very happy for winning my first ATP level match and even more because it was on top of a Top-50 player.

“Right now I’m not thinking about my position in the ranking I just want to keep improving and use this as experience for the future,” added Alcaraz, who is coached by former World No 1 Juan Carlos Ferrero.

Alcaraz has a 14-1 record at ITF level tournaments this year, winning both ITF M15 Manacor events, dropping only one set at each event. 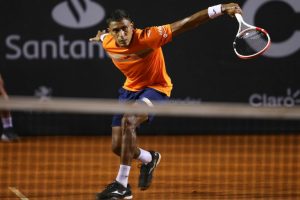 Brazil’s top-ranked player Thiago Monteiro defeated 4th seeded Guido Pella to make it through to the second round.

“I’m very happy with this win because Guido is a very strong player and is very constant,” said Monteiro. “I knew he was the favourite to win and it was a very intense match.

“We both started nervous and had a few unforced errors but then I could relax and started to get into the rhythm and it was almost like a chess match.”

Now the No 88 in the world will take on lucky looser Attila Balazs, from Hungary on Wednesday.

“I’ve seen him playing a few times but I never analysed his game,” added the Brazilian, who reached the quarter-final last week in Buenos Aires, when he lost to eventual finalist Pedro Sousa.

“I have a few hours now to study him and get ready to my next match.

“He is a lucky loser but he defeated Pablo Cuevas, a former champion here, so I need to be ready.” 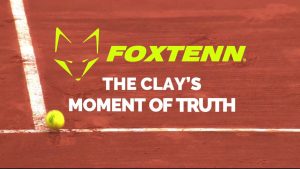 The Rio Open is the first clay-court tournament to use the new system of electronic review in tennis, developed by FoxTenn.

Three ATP Tour events, one from each category, have been selected to test the system, with Rio representing the ATP 500s.

FoxTenn allows for players to ask for a review as many times as they want, and chair umpires no longer need to leave their chairs to verify a ball mark.

Unlike other review systems, FoxTenn generates its results using the real trajectory of the ball, recorded by high resolution and high speed cameras, so there is no margin of error, since real images are used instead of estimates.

The precision is secured by way of 40 cameras, capable of generating over 100,000 images per second, which is 100 times more than the traditional system.

In addition to cameras, the system also uses a high speed scanner that tracks the positioning of the players along with the cameras, besides every movement of the ball.

FoxTenn generates a huge amount of data that is displayed on the big screen of the stadium, and these stats are also made available to players after their matches.