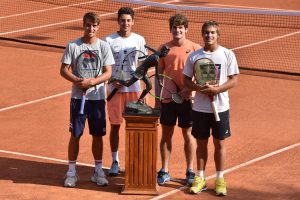 In the final of the recent MEB Cup, Felipe Meligeni and Thiago Wild vied for the title and a spot in the main draw of the 2020 Rio Open or a wild card into the qualifying competition.

It was the second edition of the Maria Esther Bueno Cup, inaugurated last year in memory of Brazil’s superstar who died on 8 June 2018 as a tribute to one of the biggest names in Brazilian sports and privileging the promising young talent the country offers.

Contested at Sociedade Harmonia de Tênis, her home club in Sao Paulo, the tournament is hosted by the Rio Open, bringing together the country’s best tennis players aged up to 23 years old based on the men’s circuit rankings. 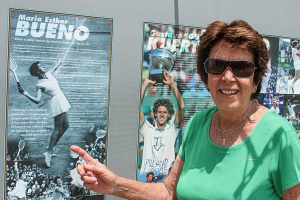 Named after the greatest Brazilian tennis player in history, champion of 19 Grand Slams, and played in her club and hometown, the Maria Esther Bueno Cup is a Rio Open initiative to encourage the new generation of national tennis, giving one of them the chance to play the main key of an ATP 500 and to runner-up for a qualifying seat.

“In addition to the incentive Rio Open offers by awarding the champion with invitation in the key, we also provided another competition, an opportunity on their merits, to be on the court showing their talent,” said Luiz Carvalho, Tournament Director.

“This is one of the best generations of Brazilian tennis of recent times, with a large volume of tennis players able to reach the top 100. And the numbers prove it.

“All of them have had a great evolution in the 2018 ranking so far, especially Klier, who climbed over 900 positions and Thiago Wild, who won the first Challenger of his career and is already the third best Brazilian in ATP”, concluded Carvalho. 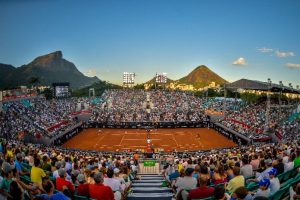 The Rio Open takes place between 15-23 February at the Brazilian Jockey Club, and already has World No 5, Austrian Dominic Thiem, and Croatian Borna Coric confirmed in the line up.

The 8 young players competing in the MEB Cup were split into two groups, in a format similar to ATP Finals, with the top two in each group qualifying for the knockout semi-finals and final.

The selection criteria consisted of Brazilians up to 23 years old as of December 31, 2019, with the first 6 vacancies defined by the best position in the ATP ranking; Matheus Pucinelli’s 7th was from the ITF youth ranking; and the 8th was an invitation from Sociedade Harmonia de Tênis given to Lucas Koelle.

7 of the 8 players returned after playing in the competition last year, with Pucinelli making his debut.

Of the returning participants, 6 had improved their rankings compared to last year, notably Thiago Wild, the current tournament champion, who raised his to No 215 after winning his first Challenger title in Guayaquil.

Orlando Luz also made it into the top 300 at 294, rising almost 100 positions this season.

Another big ranking improvement came from Gilbert Klier, who is in his first season on the pro circuit and has climbed over 900 positions since his Maria Esther Bueno Cup match.

The format of the competition consisted of 2 groups of 4 players, each playing against each other, as in ATP Finals and ATP NextGen.

From Tuesday to Friday, the group stage games were held, with the semi-finals between the first and second of each group being played on Saturday and the grand final on Sunday. with match tiebreaks up to 10 points deciding the third set.

The public were able to follow the action for free by requesting tickets in advance online.

The Alcides Procópio Group had the defending champion Thiago Wild alongside Felipe Meligeni, Gilbert Klier Jr and Matheus Pucinelli; while the Pedro Bueno Group In the final of the recent Maria Esther Bueno Cup, Felipe Meligeni and Thiago Wild vied for the title and a spot in the main draw of the 2020 Rio Open or a wild card into the qualifying competition. included Orlando Luz, Rafael Matos, João Lucas Reis and Lucas Koelle.

Wild (No 215) and Luz (No 294) were the main favourites for the title and one of the country’s top players in 2019, Wild believed the competition would be fierce. 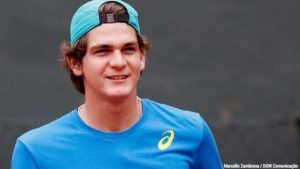 “They are all more experienced, more mature and the level is certainly higher. But this year I also get better results,” said the 19-year-old who opened his group in a duel against Pucinelli.

Wild eventually defeated the rookie, 3-6 6-2 [10-6], after the unfortunate Pucinelli twisted his foot in the match tiebreak, but stayed brave to finish the match.

Meligeni then beat Klier, scoring a rare bagel in the first set, only to be levelled in the second and closing out the match in the breaker, 6-0 5-7 [10-7]. 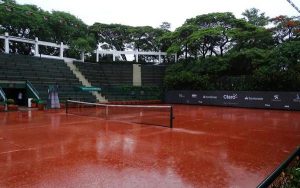 The heavy rain that began to fall late Wednesday afternoon in Sao Paulo, postponed the matches until Thursday when the schedule was caught up.

Reaching the final round of the MEB Cup group stage, the semi-finalists were determined.

A knee injury put defending champion Wild’s hopes in some jeopardy but he came through while, with a win and a loss to his credit, Luz needed a further win to continue in the tournament and as he managed to beat Reis, 6-1 6-3, made his spot in the semi-final.

Already in the semis, Rafael Matos fulfilled his table by winning his 3 matches, taking out 21-year old Koelle, 6-4 6-0, to secure his spot.

In the last match of the group rounds, Meligeni convincingly beat Pucinelli, 6-3 6-2, to keep alive his chance to play the Rio Open.

In the semi-final knockout stage of the MEB Cup, Wild faced Luz and, despite trailing in the first set, 3-5, recovered to win through, 7-5 6-4, to reach the final. 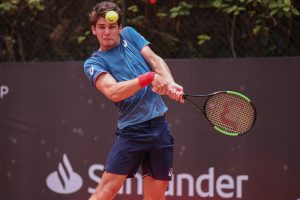 “Bringing all the best players up to 23 years old to play in this qualifying tournament for Rio Open is a very good initiative and the result – the place at Rio Open is even better,” Wild said. “Playing an ATP 500 and suddenly doing well is a great start for anyone.”

In the other semi-final, Meligeni dispatched Matos in some style, 6-6 6-2.

“Wow, I’m speechless, very happy. I’ve played Rio Open [qualifying] once, but it was an invitation, now it will be deserved because I’ve been playing well, evolving. Tomorrow we need to control the nerves. I’m going to come in intense, do my tactic, prepare well. It has everything to be a great game, ”said Meligeni.

The final of the MEB Cup took place on Sunday 1 December at the Sociedade Harmonia de Tênis and was broadcast by Globoesporte.com. 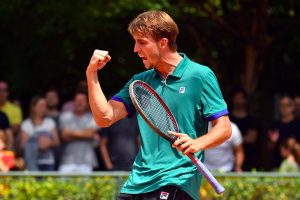 It was a big match that marked the closing of the 2nd edition of the Maria Esther Bueno Cup when Meligeni Alves beat Wild to win the title and a wild card invitation into the main draw of the Rio Open, the biggest tournament in South America.

The runner-up, Wild, won an invitation to qualify for the ATP 500 as his consolation prize.

This will be the first main tour ATP event in Meligeni’s career, who is currently living and training in Spain and last year has climbed over 700 positions in the ranking to No 393.

Meligeni lost the opening set 6-2 but turned the match around, which was not easy in the face of Wild’s confident play.

He won the second set in the tiebreak, 7-4, and accelerated to the finish line, taking the title, 2-6 7-6(4) 6-3, and celebrating the award with his family, including uncle Fernando Meligeni, a close friend of Maria Esther’s. 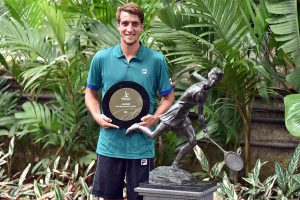 “It will be very special to play an ATP 500 in Brazil, and I think this invitation has now been well deserved, because I’ve been battling it all year,” Meligeni said.

“I started in the Futures, I went up to the Challengers and now being in the main draw of Rio Open, it’s amazing, it’s very special.

“I will prepare well, do the pre-season and train hard to get to Rio as best I can.”

On to Rio de Janeiro

The 7th edition of the Rio Open at the Jockey Club Brasileiro will take place between 17-23 February, 2020, with the organisers already signing high-quality players that will fight for the title. 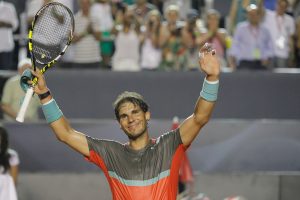 Rafael Nadal won the inaugural tournament in 2014, followed by David Ferrer, Pablo Cuevas, Dominic Thiem, Diego Schwartzman and Laslo Djere, who also found a place on the list of champions.

Thiem, Matteo Berrettini, Borna Coric and Diego Schwartzman have been confirmed for the next year’s edition.

Thanks to IMG, the young Spaniard Carlos Alcaraz will also have the opportunity to compete in the main draw, making his ATP debut in Rio de Janeiro if he doesn’t receive a wild card in Cordoba or Buenos Aires earlier in February.

The 16-year-old is the only player born in 2003 ranked in the top-500 and the youngest competitor in that group overall, scoring 7 Challenger victories and claiming the first professional title in Denia in July. 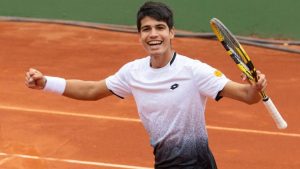 Alcaraz is the most prominent Spanish talent, becoming the 8th-youngest Futures champion and achieving the feat just a month older than Nadal when he claimed the first professional crown in 2002!

In February 2018, Alcaraz qualified for the first professional tournament at home Spain F5 Futures in Murcia at the age of 14, passing 3 rivals just to find himself in the main draw where he grabbed two triumphs, reaching the quarter-final and becoming the first player born in 2003 on the ATP ranking list.

In January, Alcaraz was the semi-finalist at M15 Palmanova event, still at the age of 15, followed by the first Challenger win in Alicante in April, delivering the milestone achievement for his generation at this level of competition.

A week later, Alcaraz notched two victories at Murcia Challenger for more points on his tally, standing as one of the youngest players on the reduced ATP ranking list.

In September, the El Palmar native advanced into the quarter-final at Seville Challenger, battling for almost 3 hours against the player ranked 120th and showing his full potential ahead of the new season when he will try to improve his ranking and probably seek the place in the top-200.