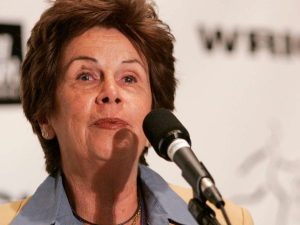 Monday 8 March was International Women’s Day and, in Brazil, the legacy of Maria Esther Bueno, the only Brazilian woman in the International Tennis Hall of Fame, was celebrated.

Tributes to Maria Esther alongside other prominent Brazilian women were featured across the media, recalling the impact they have had on their sports and the legacy they have left us.

International Women’s Day was created in 1910, after demonstrations by female workers for better conditions in their activities, especially in factories.

They had endured inhuman conditions, forced to work 16 hours a day, and were subjected to precarious conditions of hygiene and food.

Women, who were once born exclusively to be mothers, cooks, seamstresses and maids, stepped out to win the right to vote, centuries late.

Sport, fortunately, received them, albeit with a lot of prejudice at first, but then with tolerance and, finally, with respect and reverence. 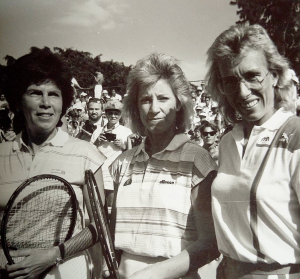 Women tennis players have been at the forefront of the fight for equality, with the incomparable Maria Esther Bueno paving the way for the virtuosity of Billie Jean King, Martina Navratilova, Chris Evert and Gabriela Sabatini.

Maria Esther Andion Bueno was born on October 11, 1939, in the capital of São Paulo, and at 19, she had won all four doubles trophies at the Grand Slams in the same year, becoming the first woman to achieve this feat.

Her tennis career spanned three decades, from the 1950s to the 1970s, although her appearances were curtailed by injury and illness.

Considered the greatest Brazilian tennis player of all time, Maria Esther was known by the nickname ‘Tennis Ballerina’ because of her elegance and skills with the racket.

Holder of 19 Grand Slam titles Maria Esther is the only Brazilian woman in the International Tennis Hall of Fame and was voted the Best Tennis Player of the 20th century in Latin America.

Maria Esther began playing tennis at the age of 6 at the Clube de Regatas Tietê and won her first national titles in 1953, when she won the Brazilian Age Groups and the Adults at the age of 14.

In the following years, she began to play internationally at a very young age, raising her first trophy outside the country, in the adult category, in 1957, in the Caribbean.

In 1958 she won the doubles at Wimbledon on her first visit, and soon after, she won her first Grand Slam in singles, the Wimbledon Championships in 1959.

Maria Esther was considered the No 1 player in the world in 1959 and 1960 but illness prevented her from defending her second Wimbledon singles title in 1961. 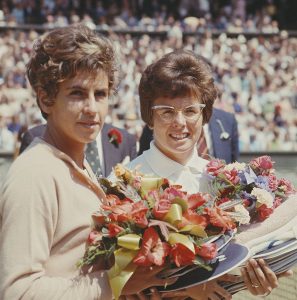 Maria Esther Bueno and Billie Jean King at Wimbledon in 1966

In all, Maria Esther won an incredible 589 titles over the course of her career, including 19 Grand Slams – 7 singles, 11 in doubles and 1 in mixed doubles.

In addition, she won 4 medals at the Pan American Games, a gold, two silver and one bronze.

Her last international trophy came at the Japan Open in 1974, at the age of 35.

After her retirement, Maria Esther was inducted into the International Tennis Hall of Fame in 1978, which now also includes Gustavo ‘Guga’ Kuerten, and was featured at Madame Tussauds in London for several years.

In 2006, she began a new career as a commentator for SporTV, part of the Globo group.

She left a legacy for generations to come as a woman who changed the history of Brazilian sport, breaking down barriers and encouraging equality alongside excellence.

Sport, which has the power to change lives, has not always been open for everyone, but it was because of women like Maria Esther, transcending challenges and focusing the spotlight on her sport, the search for greater female representation remains active today.