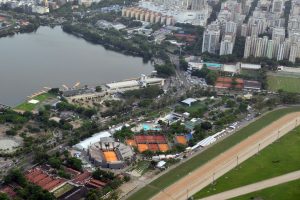 The Rio Open has consolidated itself as the greatest tournament on the South American swing, and the 2019 edition proved to be an even greater success.

In a statement Luiz Carvalho, Tournament Director of the Rio Open, said: “Every year, our tournament grows and the attendance shows how it has managed to consolidate itself in the Brazilian tennis calendar without having to depend so much on what is vital in a competition: tennis itself.

“Saturday looked like the years that [Rafael] Nadal came here.” 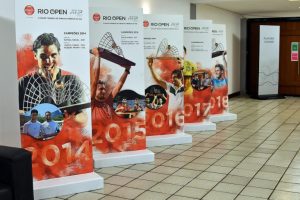 According to Carvalho, the 2019 Rio Open beat the 50,000 fan attendance mark set when Rafael Nadal played the tournament, and one of the determining factors for this year has been the transformation of the concept behind both the on and off-court activities.

On Sunday 24 February, when the Serbian Laslo Djere won the tournament title, entertainment was a key factor.

A sellout crowd saw a parade of flags of the countries represented in Rio, the national anthem sung by pop star Iza and a tribute to Maria Esther Bueno, with a painting of her being created live by the Brazilian street artist Marcello Ment, while the screen showed images of the greatest tennis player in the history of Brazil, were some of the extra entertainment elements of the tournament. 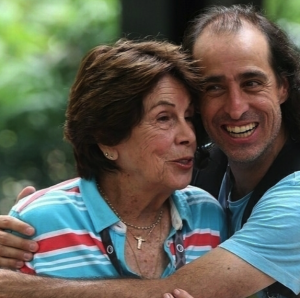 “It’s no use wanting to bring 50, 100, 200 thousand people to an event just to see sneakers,” said Fernando Meligeni, the former player who was a good friend of Bueno’s.

Off court throughout the week there was a display of Maria Esther’s Wimbledon and US Open trophies as well as some of the memorable dresses that she wore while she was winning her 19 Grand Slam titles alongside other memorabilia on loan to the event from her family.

“It will be very difficult not to have Maria Esther present this year,” said Carvalho, a close friend of Maria Esther said ahead of start of the Rio Open.

“She was a central figure in our 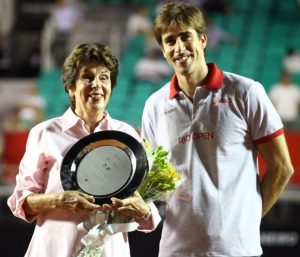 tournament, with its history and charisma.

“But we are happy to be able to pay tribute and celebrate her legacy, as well as giving the public the chance to see true relics of Brazilian and world tennis.”

The exhibit was on a special stand located on the Leblon Boulevard, which was passed by everyone who attended the tournament, an important legacy of the Brazilian icon, whose fame remains undiminished after her untimely death on 8 June, 2018, at 78 years of age following her battle with cancer. 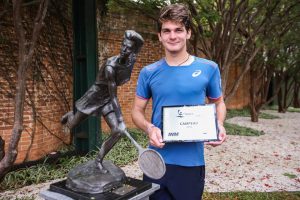 In 2018, the Rio Open staged the first edition of Maria Esther Bueno Cup, the first NextGen tournament of Brazil.

US Open junior champion, Thiago Wild, was the winner after beating Rafael Matos in the final, 6-3 6-4.

Both players had ended the group stage with three wins each.

“I want to thank everyone who came here in the last few days and supported me during the group stage, when I was losing, but I always managed to turn things around. The conditions here favoured me, because it is really fast, and now it is time to arrive in Rio with the opportunity to have a good week”, said Wild. 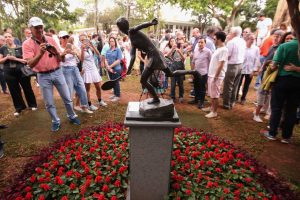 The Maria Esther Bueno Cup is guaranteed to be held again next year with the same goal to put together the best players of the new generation and award the champion with a wildcard for the Rio Open.

It is a unique chance for Brazilian players taking their first steps towards the pro tour.

“We had four days of the best of Brazil’s NextGen of Brazil, with high level matches,” said Luiz Carvalho, Rio Open Tournament Director.

“The Maria Esther Bueno Cup has accomplished its goal to promote, support and give opportunity to young players, aiming the development of Brazilian tennis.

“The event also kept alive the memory of our greatest player.”

During the event, a statue of Maria Esther gifted by her family was inaugurated at the Sociedade Harmonia, honouring the legacy of the 19-time Grand Slam champion.