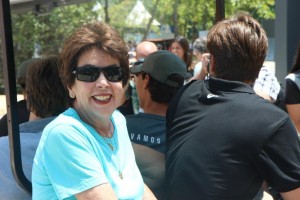 Maria Bueno at the Rio Open

Maria is at the Rio Open presented by Claro HDTV, which is a  new event on both the ATP and the WTA calendars.

It is the only combined ATP World Tour 500 and WTA  International event in South America, with a total US$ 1.5 million in prize  money of which US$ 1.25 million is for the men.

The tournament is being held at on the eight clay courts of  the Jockey Club Brasileiro, including a 6,200-seater Stadium, which Maria  officially opened on Friday with a demonstration for the main sponsor Claro HDTV  and the host sponsors.

“It  is a beautiful setting for the tournament at the Jockey Club, “ Maria told the website. 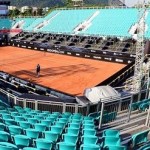 “The organisers, IMX, have done an incredible job putting  together an excellent venue for this exciting event.

“The only real concern is the weather, which is apparently  going to be very hot and humid over the next few days, which also means rain so,  unfortunately, when the matches start on Saturday, they could be disrupted.”

Maria is in Rio working for TV Globo/SporTV, host  broadcasters of the RIO Open, as well as making special appearances for the  organisers and sponsors.

She was to welcome Rafael Nadal when he arrived at the Corcovado Club for his first  press conference.

“It was great to see him in Brazil again,” she said. “He  looks so fresh and happy, even after the long flight! 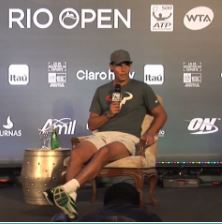 Rafa Nadal talks to the media

“We were a bit worried when he pulled out of Argentina  because of a stomach complaint and we weren’t sure how his back was doing after  his injury in the final in Melbourne but he looks fine and ready to go.

“He gave a good press conference to hundreds of media and  then the two of us took off in a golf cart to take a look at the stadium court,  which was far away. I think people were a bit surprised!”

The world number one is headlining the Rio Open, with David  Ferrer as his top challenger for his first tournament back on clay and  temperatures soaring into the 40s degrees centigrade.

“There  were extreme conditions in Australia as well, some players had to retire. We are  professionals and we have to adapt to the conditions”, said Nadal.

“I spent some days resting at home and I hope my back injury  is not going to be a problem to reach the final. 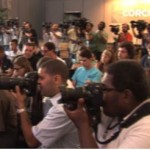 A lot of Media attention

“I felt the back issue for the first time when I was warming  up for the [Australian] final. I can’t predict the future, but I hope it is not  a critical problem.

“I wasn’t able to play Buenos Aires and feel bad about that  but luckily here I am in Rio, which is a new city for me.”

“This  is a great opportunity for Brazilian players to be playing in front of their  home crowd,” said Maria. “I wish them luck and hope they enjoy the experience.”

Nadal has been successful on his previous visits to Brazil,  winning the Costa do Sauipe in 2005 and again in Sao Paulo last year. 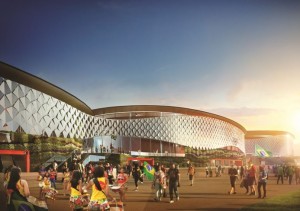 According to Maria, Rafa is planning some sight-seeing this visit, including a visit to Maracana, the football stadium that will host the  World Cup final.

He is also thinking about returning for the Rio Olympics:  “”Two and a half years is a long time, it is difficult to predict, but my  motivation, my idea, is to try to be competitive here in Brazil in the Olympic  Games.

“The fact I didn’t play in London is an extra motivation for  me”, said the Spaniard.

“I have good feelings about competing in Brazil. I have a  great connection with the fans here. This country is very special and I hope to  enjoy the experience.” 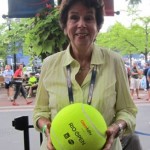 Maria Bueno announced the Rio Open at the US Open

Maria believes Brazil holds a special place in Nadal’s heart,  even after all the uncertainties he has faced there.

“When I won the tournament [at Costa do Sauipe] in Brazil in  2005, that was the start of my success,” Rafa told reporters on Friday.

“I was able to play one of the best seasons of my career,  winning 11 titles.

In order to host the Rio 2016 Games tennis matches, a stadium for around 10,000  fans is being built in Barra da Tijuca.

At the end of the event, the Olympic Tennis Centre will be  part of one of the Games’ main sport legacies: the Olympic Training Centre  (OTC), which will contribute to the development of high-performance athletes and  will enable the city to continue hosting important events on the world tennis  tour as well as in the world circuits of other sports.

“This is an important legacy for tennis in Brazil,” says  Maria. “But the biggest concern right now is over all the demonstrations that  are giving our country a bad name and costing the economy in so many ways.

“The situation is bad and the organisers at the Rio Open have  had to really step up the security because they don’t want to see anything  happening here that could hurt the participants or the future of what we all  hope is going to be a great event.”