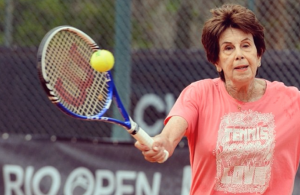 Maria Bueno attracted crowds when she hit on court in Rio

The tournament has got under way in Rio and Maria has been  busy with a variety of activities.

Over the weekend she conducted several sponsor clinics and  appeared at a Pro/Am. She also has done several media interviews and now she is  at work calling the matches.

“The days are long but very worthwhile,” she told the website. “I am really pleased at the reaction I am getting from everyone. They are all very friendly and helpful!”

Maria  has been putting in the mileage too, as the Jockey Club Brasileiro is enormous, and the TV commentary boxes are a long way from the sponsor village.

“I got lost yesterday and was rescued by two of the ballkids, who escorted me to the TV platform, warning me to be careful as I went  up to steps!”

In  addition to her SporTV duties, Maria appeared on the popular WTA Live All Access  Hour presented by Xerox on Sunday, which was broadcast around the world via the  WTA website and YouTube. You can view the programme here: http://www.youtube.com/watch?v=08WoLJ1NZgI&feature=share

The WTA website reports on catching up with the tennis  legend when Maria popped in to talk about how tennis has changed over the years  and her (unsuccessful) pep talk with Roger Federer: See more at: http://www.wtatennis.com/news/article/3674608/title/five-things-we-learned-from-wta-live#sthash.mWCZGTrE.dpuf

“I think it went very well,” said Maria, who was  interviewed by Vania King and Bruno Sassi. “It was fun!” 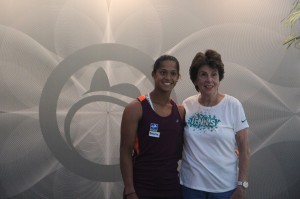 Maria  has also had a chance to catch up with the Brazilian players, including Teliana Pereira, the country’s current number one, who recently led the fed Cup back  into the team competition’s World Group II play-offs, and is ranked at 98.

“Teliana got into the main draw and has to play today  [Tuesday], as does Paula Cristina Gongalves, who was a wild card entry,” said  Maria. “But Beatriz Haddad Maia and Laura Pigoggi, who also got wild cards into  the tournament lost in the first round.

“I’m sure it has been a very good experience for them all.”

Rafa is in town 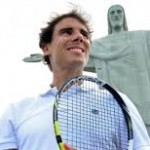 Rafa Nadal under the Statue of Christ in Rio

Meanwhile the top seed in the men’s event, Rafael Nadal,  has been practicing daily and doing some sightseeing.

He  revealed his delight at kicking-off Rio’s local football derby between Vasco da  Gama and Flamengo at the Maracana stadium on Sunday, when he was the guest of  honour at the state league match.

“It was a very special experience,” Nadal said. “I’m a big  fan of sports, of football, and this is one of the most important stadiums in  the world. 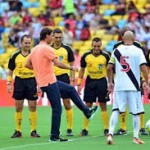 “It  has a lot of history and with the renovations it looks very nice. I think that  it’s going to be a very special stadium for the World Cup. It was an honour to  have the opportunity to do the match kick-off here.”

Nadal plays his first match on Tuesday evening since losing  in the Australian Open final and succumbing to back trouble and Maria will be in  the commentary box.

“It is always interesting to call Rafa’s matches,” says  Maria. “He plays with such intensity that everyone can learn from watching him.  He never gives up on a ball, despite injuries and opponents who are doing their  best to upset him.” 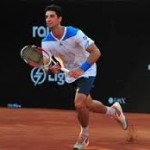 Thomaz  Bellucci received a wild card into the ATP event and won his opening match in  three sets against Colombia’s Santiago Giraldo, the sole Brazilian to win on day  one.

“That was a good win for Thomaz,” commented Maria, who  called the match. “It was a very late match that ran well into the night because  of the rain delay so to come through it was a good result.”

The  late night prevented Maria’s appearance at the Player Party where Nadal, David  Ferrer and Francesca Schiavone were in the spotlight at the seaside Sheraton Rio  Hotel.

“I was sorry to miss it,” said Maria. “I heard it was a  fabulous event and that Francesca put in quite a performance up on the stage.”

Schiavone, like many others among the players, has taken  the opportunity to spend some time with Maria.

“She’s been very friendly, as has everyone. It makes these  rather long days very worthwhile!”