The following article was published by Tennis Threads on 11 April, 2021:

The All England Lawn Tennis Club led tributes to His Royal Highness Prince Philip The Duke of Edinburgh, who died at the age of 99 on Friday at Windsor Castle, conveying sincerest sympathies to the Royal Family on behalf of the tennis world.

A statement from Buckingham Palace read: “It is with deep sorrow that Her Majesty The Queen has announced the death of her beloved husband, His Royal Highness The Prince Philip, Duke of Edinburgh.

“His Royal Highness passed away peacefully this morning at Windsor Castle.

“Further announcements will made in due course.

“The Royal Family join with people around the world in mourning his loss.”

The Duke was married to Queen Elizabeth II for 73 years and was the longest-serving consort in British history.

In a statement posted on wimbledon.com and social media, the All England Lawn Tennis Club said: On behalf of all at The AELTC, we wish to convey our deepest sympathy to Her Majesty The Queen and The Royal Family on the passing of His Royal Highness The Duke of Edinburgh.

“We were honoured to welcome The Duke to The Championships, Wimbledon, on six occasions, most recently in 1977 during The Centenary Championships. 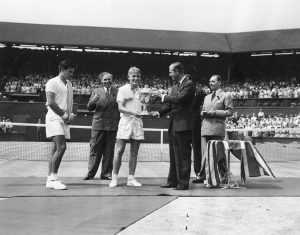 “His Royal Highness also graciously accepted the invitation to present the Gentlemen’s Singles Trophy on Centre Court to Lew Hoad in 1957 and Neale Fraser in 1960.

“The Duke’s commitment to a life of service which lasted more than six decades is an extraordinary legacy.

“We hope that during this time of sadness, Her Majesty will take comfort in the high esteem and deep respect in which The Duke was held.”

The LTA has also sent their condolences to Her Majesty The Queen and the Royal Family following the death of the Duke of Edinburgh.

“On behalf of everyone at the LTA, I would like to send condolences to Her Majesty The Queen and the whole Royal Family,” LTA Chief Executive Scott Lloyd stated.

“The Duke of Edinburgh had a lifelong passion for all sport and attended The Championships on a number of times.

“He dedicated his life to service and was particularly committed to giving young people opportunities. He will be much missed” 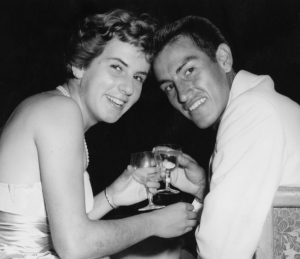 In 1960, defending champion Maria Bueno famously up-staged the Duke by arriving fashionably late at an International Club dinner and found to her dismay that everyone was seated with just one chair left, the one to the left of Prince Phillip.

“I was horrified and didn’t know what to do,” Maria recalled years later. “Fortunately the man in the red coat saw me looking in from the door to the hall and came to get me, and he took me round the back so I could slip into my seat from behind a curtain.

“Without thinking I put my hand on the Duke’s shoulder and apologised, which of course, was completely the wrong thing to do with royalty.

“He was wonderful, though, and said, ‘ah, there you are, do sit down, we’ve been waiting for you’. The hall had gone very quiet so they all heard and laughed, but then gasped when they saw I was touching him!

“We had a great time. He was very friendly and asked lots of questions and was very funny.”

Later, the Wimbledon Committee insisted Bueno write a letter of apology to Prince Phillip at Buckingham Palace, which she did, and she received a friendly reply.

Prince Philip, of course, was a sportsman in his own right, competing in polo and becoming a world champion carriage driver.

He was a well-known figure in sporting circles, most notably the equestrian world, where he helped to develop the sport of carriage driving, and was also part of drafting the early rule book after giving up playing polo at the age of 50 in 1971.

He was a world champion in carriage driving in 1980 and was president of the International Federation for Equestrian Sports from 1964 to 1986.

Among the number of books he authored were editions of Competition Carriage Driving and Driving and Judging Dressage.

He was also a regular attendee, alongside the Queen, at Royal Ascot where they were able to celebrate multiple victories of horses she owned, including thrilling 2013 Gold Cup winner Estimate.

The Duke of Edinburgh was also a regular visitor to Cowes Week as part of his, and the Queen’s, enjoyment of yachting.

The Prince promoted sport as part of the Duke of Edinburgh’s Award, a youth programme he founded in 1956, which was designed to improve the lives of young people through a series of activities in four areas, one of which was Physical, and included sporting achievements.

Prince Philip was president or patron of hundreds of sporting organisations, including the Modern Pentathlon Association, the Army and Royal Air Force Boxing Clubs, The British Racing Drivers’ Club, The Jockey Club and The Lord’s Taverners. 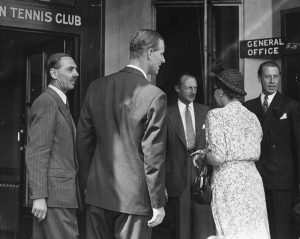 According to reports, Prince Philip wooed Queen Elizabeth by jumping over nets on a Devon tennis court, impressing the young princess with his ‘larking about’.

Princess Elizabeth, as she was known then, was only 13 at the time and was captivated by the 18-year-old during a visit to the Royal Naval College in Dartmouth.

It was July, 1939, and Elizabeth was unable to take ‘her eyes off him the whole time’ as Philip apparently leapt over tennis nets and generally ‘showed off’.

Marion Crawford, Elizabeth’s governess, recalled: “I thought he showed off a good deal.”

The Princess was entranced, but Philip later revealed that he did not quite see the episode in the same light.

“Well, we’d met at Dartmouth, and as far as I was concerned it was a very amusing experience, going on board the yacht and meeting them, and that sort of thing, and that was that,” he told biographer Basil Boothroyd.

Two of the other cadets had contracted mumps, so Philip was the only one allowed to meet the Royal Party.

King George VI’s official biographer, Sir John Wheeler-Bennett said the Princess fell for Philip at once on that pivotal weekend.

”This was the man with whom Princess Elizabeth had been in love from their first meeting,” he wrote.

It wasn’t until 1947, however, after Elizabeth’s 21st birthday, that the public announcement of their engagement was made.

The couple were married in front of 2,000 guests in Westminster Abbey, just two years after the end of World War Two, with the country still reeling from the conflict.

On 6 February 1952, with the premature death of King George VI. Queen Elizabeth was just 25 years old, and Prince Philip aged 30, when she ascended the throne.

Theirs was a double-act relationship that endured seven decades, often performing their duties apart but always connected, his support enabling The Queen to fulfil her role as Monarch.

From March 2020, in the final months of their marriage, because of the pandemic they spent more time together than they otherwise might have done within the confines of Windsor Castle.

For more than 70 years they have been the one constant in each other’s lives and The Queen will feel Prince Philip’s loss deeply and profoundly.

Never showy or openly demonstrative, theirs will be remembered as an enduring royal love story.

Tennis joins the sporting world and the nation in mourning the loss of a great man.

← Instituto Tênis starts its partnership with LATAM
The missing mural →