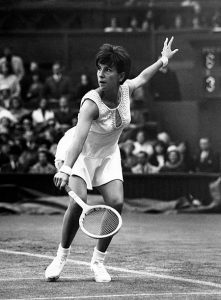 In the mid 1980s the British street artist Walter Kershaw, generally acknowledged as ‘the Original Bansky’, was commissioned by the Cultura Inglesa to create a series of murals depicting Brazilian life and culture throughout the city of São Paulo, one of which included Maria Esther Bueno. 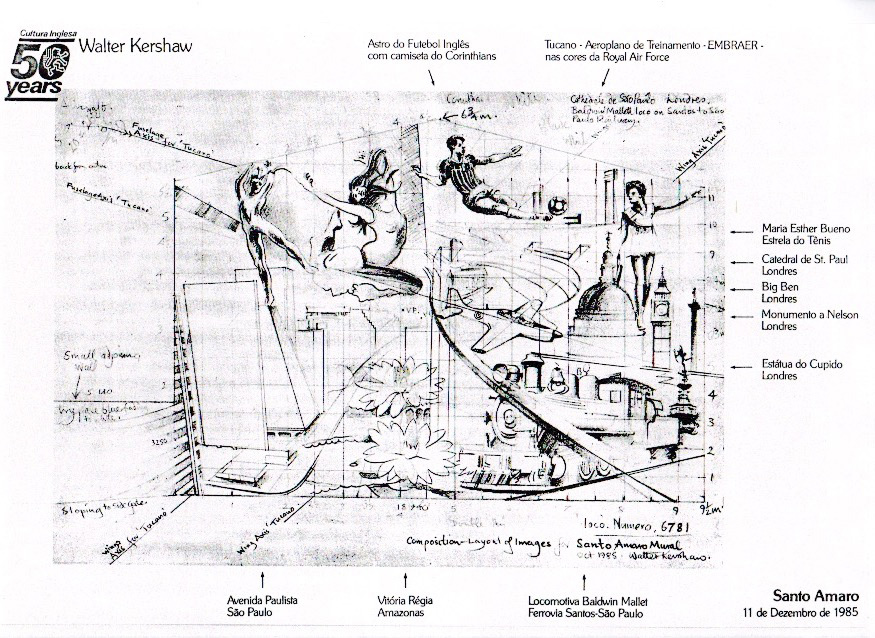 While this allegedly has since disappeared, the main piece, ‘Mural Brasil’ or ‘Life in Brazil’, was recently restored and can be seen on a wall of the headquarters of FAAP, Armando Alvares Penteado Foundation, one of the most prestigious and respected academic institutions in Brazil, on the corner of the streets Armando Alvares Penteado and Avaré.

‘Life in Brazil’ – Higienopolis, São Paulo 1983 was commissioned by FAAP and the ‘Cultura Inglesa’

Details of this Cultura Inglesa mural, however, were scant until a working blueprint was found among Maria Esther’s papers in London dated 11 December 1985, images of which can be seen at the top of this page. 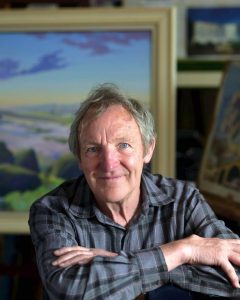 There was also a press release, dated 15 October 1985, issued by Cultura Inglesa that stated: “Walter Kershaw, Britain’s leading muralist, is in São Paulo at the invitation of the Cultura Inglesa, which is celebrating its 50th Anniversary this year.

He has been asked by the Cultura to paint a wall at its new Santo Amaro branch, inaugurated on Thursday 17 October by the President of the Cultura, Dr José Pinheiro Neto and the British Consul General David Walker.

The mural at the new Santo Amaro branch (Av. Santo Amaro 6781) will feature views of London and São Paulo, and themes illustrating the historical inks between Britain and Brazil.

Walter Kershaw, 44, graduated in Fine Arts from the University of Durham in Great Britain. He established himself quickly as a conventional artist, and had paintings purchased by the Victoria and Albert Museum in London, and by the Gulbenkian Foundation.

Subsequently he became interested in mural painting and became the leading British exponent of this new art form. His works have been featured on BBC Television, and he has made films on mural painting for West German television.

Walter Kershaw came to São Paulo for the first time in 1983, and supervised a Mall painting on Rua Armando Penteado carried out by students of FAAP. His latest British work was a mural, completed this year, for the Manchester United Football Club.” 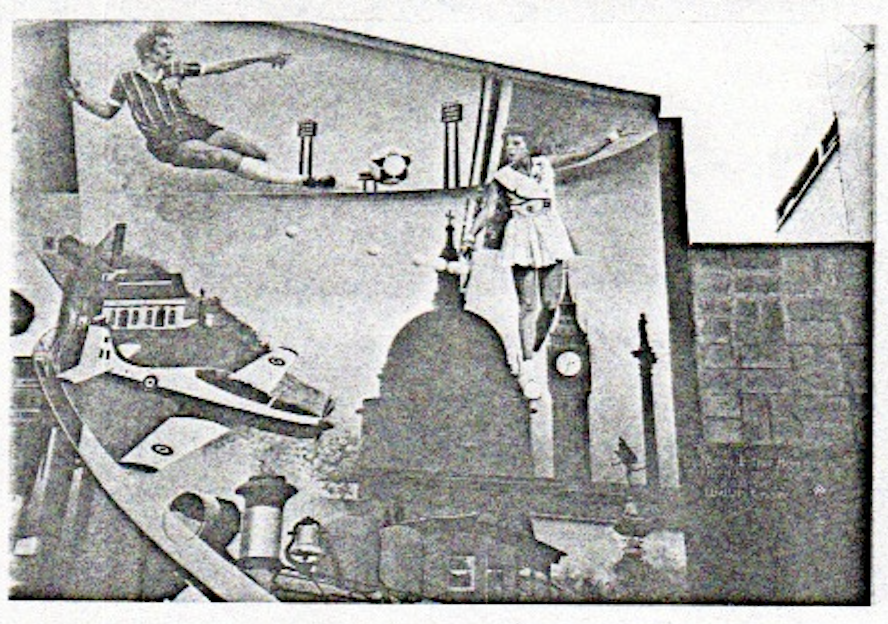 This image shows the mural in situ and is of poor quality.

There are also branches in other states of Alagoas, Rio Grande do Sul, Paraná, Bahia and Espírito Santo.

Maria Esther met the artist at the time, and was delighted to receive a water colour painting from him as a memento. 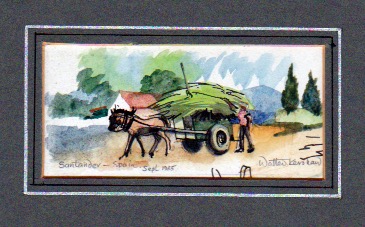 This small water colour painting was given to Maria Esther by the artist and is inscribed ‘Santander – Spain, Sept 1985″ and signed – Walter Kershaw.

Fortunately, one of his remaining works is alive and well in São Paulo – Mural Brasil, which has been restored as a contribution by FAAP to the revitalisation of the neighbourhood of Higienópolis.

The website states: “After cleaning and waste disposal processes caused by the action of time, operations to protect and saturate colors, and structural repairs, Mural Brasil, located on the wall of FAAP headquarters, on the corner of Armando Alvares Penteado and Avaré streets, gained life and projection again, through a lighting project that valued its painting and highlighted its colors.

The Mural was made in 1983 by artist Walter Kershaw and a team formed by his wife, Hillary, and 26 FAAP students, for the traveling exhibition Painting the Town.

Promoted by the British Council in Latin America, the exhibition presented, in São Paulo, 90 murals at MASP, in addition to the painter’s on-site panel.

The panel presents a sequence of images materializing the idea that the artist proposed from Brazil, based on information he already had and on impressions he recorded, from the contact with reality.

Read from left to right, it describes landscapes, everyday scenes, allusions to the natural world, traditional references and contemporary repertoire.

By choosing images of mountains, Indians, tractors, jaguars, flowers, birds, industries and skyscrapers, the artist evidenced the coexistence in the country of agricultural and industrial realities, rural and urban.

For lighting, 16 projectors (Terra Maxi – Reflector 1447) embedded in the sidewalk were installed, with 70W/830 metal steam lamps manufactured by Scheréder.

The luminotechnical project was done by engineer Plínio Godoy, responsible for the lighting projects of the Municipal Theater, Ipiranga Museum, Court of Justice and Stayed Bridge, among others.

The management of the implementation of the lighting system was carried out by Engineer Cláudio Helú.

For the restoration, the company Julio Moraes Conservation and Restoration, specialized in the recovery of mural paintings, was hired. The project has the accompaniment of the students of the Fine Arts course of FAAP.

Over seven months of work, cleaning procedures were performed for the removal of vegetation residues, stabilization of the paint, filling of cracks and cracks, and pictorial reintegration tests.

The work included photographic documentation and detailed survey of the state and mapping of damage, in addition to the filling of surface defects. Cleaning and staining prepared the surface for final chromatic reintegration.

All procedures have been performed according to internationally adopted ethical and technical criteria, such as respect for the original work, reversibility of the processes employed, addition of the minimum possible materials, chemical and physical adequacy of materials – in order to avoid further deterioration – and registration of the intervention, with the guidelines for the future conservation of the restored element.

Walter Kershaw was born in 1940 in Rochdale, Lancashire, England, and received a Bachelor of Arts degree from Durham University. Specializing in mural painting, he has served as an independent artist in New York, San Francisco and Paris.

He worked for the Army as a ‘war artist’ in Northern Ireland and painted in construction areas in Scotland for North Sea Oil. His name has become a reference for British mural painting and there are works of his own in several English cities.

In his testimonies of the period, the artist stated that it was decisive for his work to know the American advertising murals, their effectiveness and their motivation to develop panels detached from commercial or political intentions, but focused on the experience of art.

He also emphasized his belief in the need for works of art in contemporary cities and murals as accessible works.”

Sadly, the artist has since fallen into disrepute after he was handed a two-year restraining order to stop him from stalking a former mistress in 2013, and then he was given a suspended prison sentence in 2015 after breaching the order.

Kershaw was apparently subsequently jailed for 26 weeks in 2017 for breaching both but, after being freed, he accosted her again over the Christmas period of 2018 and was sentenced to a further 20 weeks, suspended for 12 months and banned from contacting her for life.

In 2020 he twice flouted the order and was given another 12 weeks jail suspended for two years and following further incidents was jailed for 4 years at the age of 81.

Regardless, the works of ‘the Original Bansky’ live on all around the world.