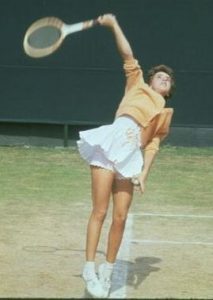 Much gets written about the growth in popularity of women’s tennis, and many think this started with the formation of the Women’s Tennis Association back in 1973 by Billie Jean King, but the foundations were laid by the likes of Maria Esther Bueno, who paved the way.

Although its origins trace back to the inaugural Virginia Slims tournament in 19970, arranged by Gladys Heldman, women’s tennis was put firmly on the map much earlier by Bueno, whose rivalries with first Margaret Smith Court and then Billie Jean Moffitt King became the stuff of legend in the late 1950s and throughout the 60s.

While some prefer to believe it all began in 1968 with the advent of Open Tennis, and fail to acknowledge the contribution Bueno made, the WTA’s founder, Billie Jean King has never forgotten it and is quick to recognise her remarkable achievements.

It is also heartening to see some institutions, such as Brazil’s daily newspaper O Globo and the popular Tenis Brasil website acknowledging the important role Maria Esther Bueno, so often the forgotten champion, has played in paving the way for women’s tennis today. 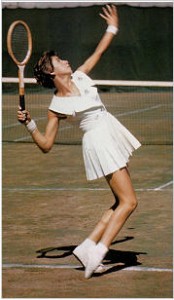 Ja Allen wrote for the Bleacher Report an article entitled ‘Queens of the Court: Maria Bueno, A Latin Sliver of Fire and Ice’  on 29 November 2009 that describes the charisma Bueno brought to the tennis court in the ’50s and ’60s, employing her natural ability to carve a unique mark on the women’s game: –

“She grew up during an era prior to the movement known as women’s liberation.

“Back then she was a novelty—a woman born with natural athletic gifts who lived to find and fulfil her destiny.

“Such a feat was rare in those days because even superlative women often remained wedged in their seats at the back of the bus.

“As a natural athlete, Bueno found success early and triumphed often because of her formidable talent and her staunch determination to succeed in the sport.

“She became the first woman from South America to win at Wimbledon. 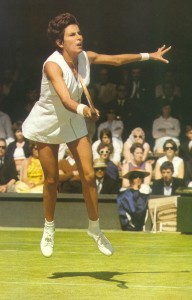 “Called a ‘Latin sliver of fire and ice’, in her second Wimbledon win over Sandra Reynolds by the Associated Press on July 3, 1960, Bueno imposed her presence on the tennis world and in the process engaged the media with her flair as well as her game.

“Her style, grace, and easy movement won her accolades around the world as she stormed the European courts with her early serve and volley style of play. She rushed the net and hit with power and depth employing sharp angled volleys.

“At the time, at 5’7”, Bueno was considered tall and thin, weighing in at 110 pounds.  Her nickname was ‘The Brazilian Swallow’ because she appeared to swoop in quickly to dominate at the net.

“Enhancing her reputation as a player, Bueno was always stylishly dressed in the best and often frilliest tennis attire of the day.

“Once wearing a traditional white tennis dress with pink lining at Wimbledon, she had the crowd in consternation with the occasional flounce of pink as she mowed down her competition.

“While other women’s matches were relegated to back courts, Bueno, always a crowd favourite, found her matches scheduled on the main courts with the stands packed.

“Even the male pros gave up enthralling card games to watch the young Brazilian play.”

“Bueno’s first Grand Slam title came at Wimbledon, where she teamed with the great Althea Gibson to win the women’s doubles championship in 1958. The press and the professionals were beginning to pay attention to this little Brazilian wonder. 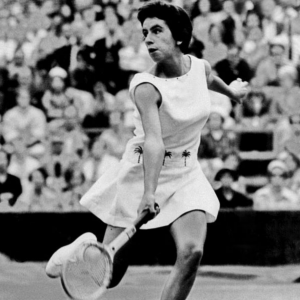 “Bueno won her first singles Grand Slam title at Wimbledon in 1959, defeating Darlene Hard. At the end of the summer Bueno also won the U.S. Championships and in the process earned the No 1 ranking. The Associated Press accorded her the award for the 1959 Female Athlete of the Year.

“Her flamboyance, her commitment to training and her rigorous style of play led to many agonising injuries for the young woman who bore them without complaint. 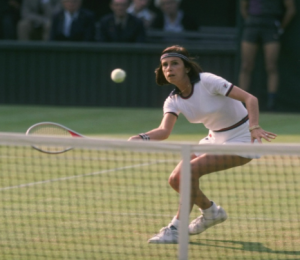 “She played her best tennis as an amateur, enduring poverty and injuries in pursuit of playing time and world prominence.

“By the time prize money began to be awarded, Bueno suffered with arm and leg injuries severe enough to keep her from competition after 1968.

“She did come back in the seventies to play a few matches, even winning the Japan Open in 1974—to serve as her one professional title as contrasted to her 62 titles as an amateur.

“Bueno was inducted into the International Tennis Hall of Fame in 1978.”

Unfortunately administrators and the media, many too young to recall true tennis history, continue to fail to acknowledge such accomplishments, although the International Tennis Hall of Fame plays its part in keeping the past alive by promoting the exploits of the great players from the past.

Word also seems to be getting round because, bucking the trend recently, in Brazil, there have been two important media features recognising the important role that this great champion has played in the sport.

We are pleased to reference these contributions here.

It not only contains marvellous photographs but also an impressive array of cuttings from the newspaper over the years.

A translation of the original can be viewed by clicking HERE.

The second feature came in the form of a blog by José Nilton Dalcin on the Tenis Brasil website that included Pathé News footage in action in the 1964 final, which can be viewed below.

A translation of the original can be viewed HERE. 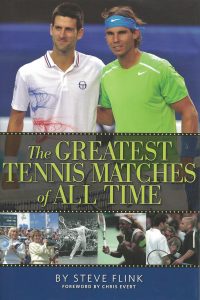 Additionally, the brilliant account of the famous 1964 final between Maria Bueno and Margaret Smith (Court) at Wimbledon is contained in a book by the well-renowned American tennis writer and author, Steve Flink, entitled ‘The Greatest Tennis Matches of All Time’ (published in 2012), in which he lists the 10 greatest at the All England Lawn Tennis Club.

The 1964 final featuring Bueno against Smith ranks seventh in terms of Wimbledon matches and twenty-seventh overall.

It gives great insight to the rivalry that captivated millions around the world as Flink  pays tribute to these great champions.

← Hitting to a length
Will we be ringing in the changes? →