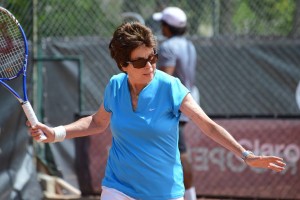 Maria Bueno takes time out to have a hit in Rio

It was a long but  enjoyable ten days in Rio for Maria, who seemed to be running from pillar to  post at times.

Maria’s commitments  there were extensive, ranging from on-court appearances to long stints in the  commentary box for SporTV.

“Friday was quarter finals day and a very long day,” said Maria. “Probably my longest of the week!”

Maria took every  opportunity she could get to have a hit on court herself and Rio’s Jockey Club  was no exception where she has been watched by large crowds.

“It  took me a while to get around the site,” she laughed. “I was stopped all the  time to sign autographs and pose with fans for photos. I’m amazed these people  are of all ages – from those my age down to young kids!

“I was very touched at  the warm reception I got from the crowd the other night at my presentation. It  was really nice.”

Last Saturday she was  scheduled to pop into Nick Bollitieri’s Clinic for a quick personal appearance  and to catch up with her old friend.

Imagine her surprise  when she arrived to be begged by organsiers to take over the show as Nick had  been snowed in the United States and his flight cancelled.

Two  hundred children participated in the Rio Open presented by Claro hdtv Kid’s Day  to get a taste for playing tennis, many from social projects in Rio, and  experience the venue of the greatest tennis event in South America.

Maria had her hands  pretty full as she and local coaches organised the kids into groups over the six  courts set aside for the event.

“It  was a bit chaotic but the kids had fun and that’s the main thing,” said Maria.  “It was very hot too – 35 degrees – so it as quite an effort from everybody!”

The clinic also involved Maria signing hundreds of autographs and posing for photos. 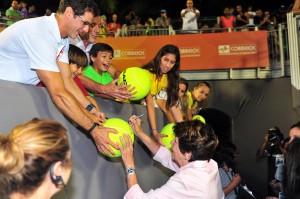 “Usually people  aged 40 or more ask to take photos with me. Here kids are asking. That is a big  surprise,” she said.

In all a great success, after which Maria had a hit and then returned to the commentary box for the semi  finals.

The surprise of the day  was the straight sets win of Alexandr Dologopolov over the second seed, David  Ferrer, 6-4 6-4, while world number number one, Rafael Nadal, had to fight hard  against compatriot Pablo Andujar.

“Rafa dropped the  opening set and had to fight right down to the wire,” said Maria. “He won  through in the third set tiebreak but it was a battle and a thrilling match.”

Nadal looked tired  after the match and admitted he didn’t feel the same energy as on other days due  to the heat and humidity. He also suffered cramps in his hand. 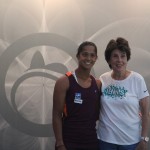 In the women’s event,  the top seed Klara Zakopalova handed out a 6-2 6-1 defeat to Brazilian favourite Teliana Pereira and cruised into the final where she met the Japanese Kurumi  Nara.

Pereira is the first  Brazilian woman in 23 years to crack the WTA top 100 and she enjoyed meeting  Maria, who is an icon in her country.

“It has been very good  for the tournament to have such Brazilians doing well in both the men’s and  women’s events,” said Maria.

“Thomaz and Teliana  have more than justified the wild cards they received and this whole event is a  great boost for tennis in Brazil. It is important it is a success.” 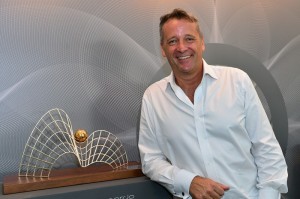 Chris Kermode, the new boss of the ATP paid a visit to Rio

ATP President and CEO Chris Kermode was in Rio assessing the tournament and was pleased with what he  had seen.

“Startup events  are very different,” Kermode said. “It is incredibly difficult to work  everything right. Here we have a fantastic venue, many things being put  together. For a year one, this is great.”

Kermode, who started a three-year term as head of the ATP this year, added: “There are  always improvements along the way, but it doesn’t get much better than this. The  venue is beautiful, the surrounding is beautiful, the organization.”

Maria caught with him  while he was there and it seems Chris is also talking about the possibility of  raising the level of the tournament in the future.

“He recognises that  Brazil and South America are great markets for tennis,” she said. “There is so  much attention on us right now, with the World Cup and the Olympics, so we need  to take advantage to give tennis also a big push.”

The Rio Open is an ATP 500 event and one of 61 tournaments in more than 30 countries.

Maria presented the trophy to surprise winner Kurumi Nara, who arrived in Rio as just  another player in the main draw of the first WTA event of the city.

Nara moved into the top  50 in the WTA rankings for the first time in her career this week.

In  the men’s final Nadal beat Dolgopolov 6-3 7-6(3) and never looked under threat  on his way to winning his 43rd clay court title and stretching his record on the  surface to 298-21, the best of the Open era.

Dolgopolov hit several  exquisite winners, especially from the backhand wing, but struggled to find a  consistent enough game to trouble Nadal, who made only a handful of unforced  errors in the whole match.

The 2013 French Open  champion has not lost on clay since his defeat by Novak Djokovic in the Monte  Carlo Masters 10 months ago.

“It was a fantastic  tournament and Luiz [Fernando Carvalho] should be very proud of what he and his  team did in Rio,” concluded Maria. “I was very pleased to play a small part in  all that and wish them every success in years to come.”