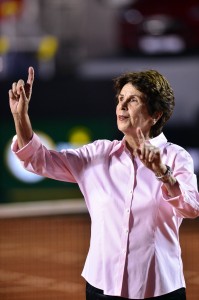 The Rio Open paid tribute to Maria on Wednesday night at  Jockey Club Brasiliero, acknowledging her as one of the biggest names of  Brazilian Sport and a world tennis icon.

The winner of 19 Grand Slam titles stepped onto centre court  to watch a video screened to the song ‘Mary, Mary’ by Milton Nascimento and  produced by the organisers as homage to her brilliant career.

It  all brought a standing ovation from the spectators.

Maria received a plaque to  commemorate the occasion from the tournament director, Luiz Fernando Carvalho,  who is also the grandson of Alcides Procopius, the first Brazilian to play at  Wimbledon and an important influence on her career.

“I hope that everything I did serves in some way to inspire  young players, and this tournament in Rio is the first of many. Brazil needs  events like this.”

“I want to thank you for everything you did for tennis. You are an example to be followed,” said Carvalho. 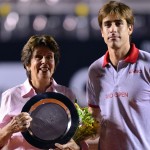 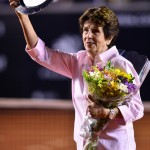 Maria Bueno shows off her plate and flowers 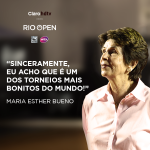