Awarded to Maria Esther Bueno for services to sport: 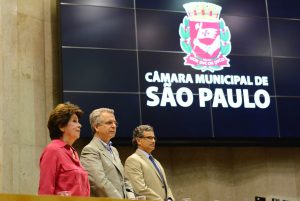 Maria Esther Bueno received many important awards and medals throughout her lifetime, including the São Paulo medal and diploma, Medalha Anchieta e o Diploma de Gratidão de São Paulo, the highest accolade the state capital can bestow, in a ceremony held at the City Hall in October 2014.

The City Hall of São Paulo recently paid further tribute to Maria Esther in memoriam with the bestowing of the Medal of Honour to Sports Merit, an accolade awarded in recognition of services to sport in the Municipality of São Paulo.

This latest award was received from Thomas Koch, friend of Maria Esther, by her eldest nephew, Pedro Augusto De Olivera Bueno, on behalf of her family, who were present at the ceremony.

“It was a privilege for me to receive this honour, especially from the hand of Thomas, of whom I am a fan. I’m sure my aunt would be very happy,” said Pedro Bueno.

Alongside was a special exhibit of Maria Esther’s achievements featuring some of her coveted trophies, including the replica of her first Wimbledon singles Trophy.

“Wherever we can, we will display her trophies and dresses so people will remember and appreciate what achievements she made.” 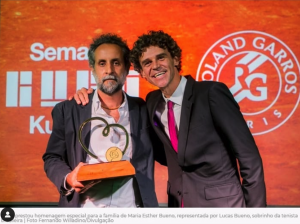 In Florianapolis, Maria Esther’s youngest nephew, Lucas, received a posthumous tribute from Gustavo Kuerten alongside Leandro Cruz, the Minister of Sport during the Brazilian’s tennis festival on 20 October 2018.

This took the shape of a heart alluding to the shape that Guga drew in the French clay when he won the Roland Garros tournament in 2001.