Mateus Alves won the Maria Esther Bueno Cup and is now guaranteed direct entry into the main draw of the Rio Open in February after defeating Eduardo Ribeiro in the final on Sunday, 6-7 6-4 [10-5].

The 3rd edition of the MEB Cup, which was played at the Rio de Janeiro Country Club, is a competition that brings together 8 of the next talented generation of Brazilian players aged up to 24 years old, and offers them the opportunity to participate in the ATP 500 tournament due to be played from 18-26 February at the Brazilian Jockey Club in Rio de Janeiro. 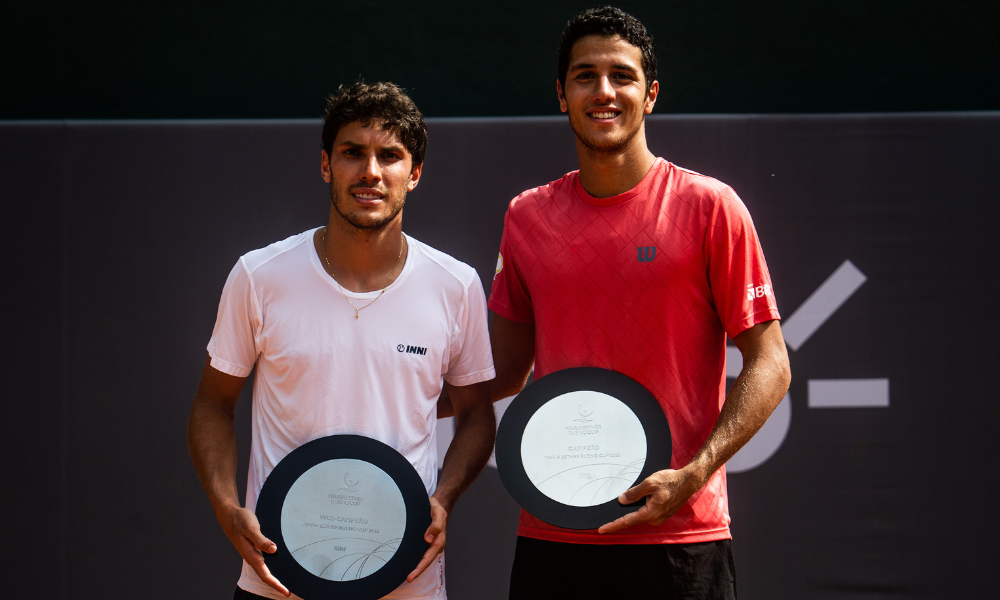 At the age of 21, Alves has already played twice in the Rio Open Qualifying as well as in the main draw of the doubles, but his MEB Cup win now gives him a wildcard into the main singles draw.

“It is very likely that it will be the happiest moment in my career,” Alves said. “This victory in the Maria Esther Bueno Cup came at a spectacular moment, because I have been recovering from an injury for 5 or 6 months.

“I believe that the decisive factor for my victory here was the mental one.

“This was a challenging week where I suffered from pain, from the heat, from the pressure to play such a special tournament but, I think, I got along very well.

“He [Ribeiro] was willing to leave everything on the court and that’s what happened.”

From São José do Rio Preto, Alves was asked about his expectations at the Rio Open 2023.

“It’s a very hard tournament, of a very high level,” he said. “Until then, I hope to work as best as possible with my team, to be able to get the most out of it, just as I did this week.”

24-year old Ribeiro was the most experienced player among the 8 competitors and, despite his disappointment at the loss, he takes consolation with a guaranteed place in the Rio Open qualifying, consolidating his great season during which he has won 3 professional ITF tournaments in 2022 and rose more than 500 positions in the ATP ranking, going from No 964 to 436.

Created in 2018 as a tribute to one of the greatest athletes in the history of Brazil, the Maria Esther Bueno Cup aims to encourage the new generation of national tennis.

“The Maria Esther Bueno Cup was created with the aim of giving this chance to young Brazilian players and has fulfilled this mission,” said the director of the tournament, Thomaz Costa. “For the Rio Open, it is very good to have these kids in the draw, and in qualies on their own merits.

“We try to shorten a path that, we know, it is long and difficult.”

The event also helps to keep alive the memory of Brazil’s greatest player. 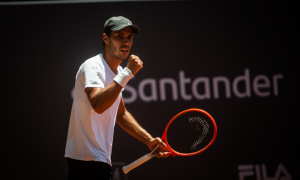 Eduardo Ribeiro was the first to reach the final of the MEB Cup [Photo: Peter Wrede]

The first semi-final did not go as expected, with Heide suffering a lower back injury in the warm-up and unable to complete the match, retiring after losing the first set, 6-1, and 40-15, sending Ribeiro into the final.

21-year old Alves took on 16-year old Fonseca in his semi-final, who took the first set in quick time, but the 441nd ranked player in the world turned the tables with an equally fast second, and then snatched the match tiebreak, 1-6 6-2 [10-6].

“Today, more than anything, it was very mental, very emotional,” Alves admitted. “It was an internal battle of great strength, even more so with all the fans against [me] and the strong heat.

“I hope to be in the final with the same energy and determination as today, when I fought from the first to the last point.”

Alves did just that, securing his wild-card in another match breaker. 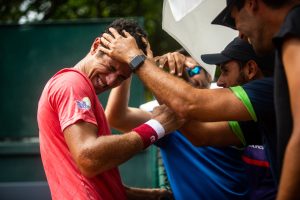 Mateus Alves came out the winner of the wild-card into the main draw of the 2023 Rio Open [Photo: Peter Wrede]

”I’m very happy. It’s the realisation of a dream,” he said. “To win a place in a competition with the grandeur of the Rio Open is a more than deserved reward… to be able to play the Rio Open in 2023.”

Ribeiro reflected his disappointment: “I’m sad because I think I got very close to the title,” he said.

“At the beginning of 2022 I never imagined that I would be playing the Maria Esther Bueno Cup, let alone having a guaranteed place for the Rio Open qualifying.

The Rio Open 2023 already has some big names confirmed, with World No 1 Carlos Alcaraz from Spain, and Norwegian Casper Ruud, ranked 3rd, in the line-up.

The most important annual sporting event in the city, the Rio Open is one of the few ATP 500 tournaments played on clay, alongside Barcelona and Hamburg. 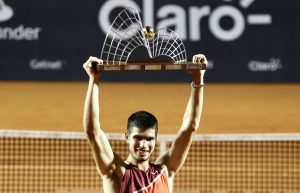 Among the ladies, the Rio Open has had the presence of Italians Sara Errani, 2015 champion, and Francesca Schiavone, Roland Garros champion and winner of Rio Open in 2016.

In addition to the matches and practice sessions held on the 9 clay courts, including the Center Court with a 6,200-seat capacity, Leblon Boulevard, is an area with stands, stores and food courts for the audience.

Starting in 2017, Rio Open became an ATP-only tournament in a strategic decision made by IMM and the Instituto Carioca de Tênis to provide more comfort for both athletes and spectators.

The 6th edition of Rio Open, in 2019, had the breakthrough of two promising players: Serbian Laslo Djere, who beat Dominic Thiem in the first round and won the title, and runner-up Felix Auger-Aliassime.

The 18-year-old Canadian became a crowd favourite with the more than 50,000 people who attended over the week of the tournament.

In 2020, the Rio Open was one of the last tournaments played before the pandemic, and Dominic Thiem arrived as the favourite, after being a runner-up at the Australian Open, but it was Cristian Garin who lifted the trophy.

The Chilean made it through the rainy days in Rio, defeating Italian Gianluca Mager in the final, while Spaniard Marcel Granollers & Horacio Zeballos from Argentina were the doubles champions.

The 2021 edition was cancelled due to the Covid-19 pandemic, but the event returned in February 2022 when Alcaraz made history by stunning 2018 champion Diego Schwartzman from Argentina in the final, becoming the youngest ATP 500 champion at  the age of 18 since the category was created in 2009.

The Rio Open takes place between February 18 and 26 at the Brazilian Jockey Club. 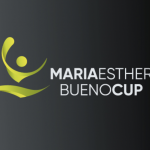